On the one hand, its just so pedestrian. I mean, I get that I'm jaded. I'm English, our last prime minister apparently once shagged a dead pig's head and if all a peer of the realm gets up to in their spare time is crossdressing and cocaine parties we consider them quiet and dignified individuals. I'm generally not one to even care about political sex scandals unless they involve actual crime but this one... 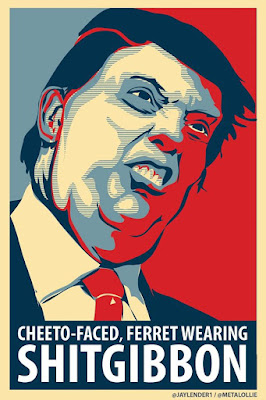 Now we get to the other hand: there is the very real possibility that, as a businessman, Trump was led into a situation designed to create blackmail material and he fell for it.

Now, all sorts of... not-really-denials have surfaced. Reddit users claim to have originated the story, Wikileaks has thrown a tantrum about how they won't endorse the story, and The Donald himself has made a series of bizarre Tweets ending with the assurance that Russia (not anyone in Russia, just “Russia”) has told him the story is a complete fabrication. On a side note, isn't it so reassuring how Trump will just believe things when foreign powers tell him?

Now, call me a pedant but considering that the story concerns him, why does The Donald need to be told the story is a fabrication? Unless he's referring not to the story but the existence of the blackmail tape because that would make sense of the sentence. Just grammatically speaking without accusation.

So, honestly, whether this is all true could go one way or the other. Now, I don't trust redditors, I don't trust Wikileaks and I sure as damp ammonia-scented fuck don't trust Donald Jodocus Drumpf but I admit this could still be fake. The thing is, though, that its believable in some very compelling ways.

There's a lovely detail to the story that the bed Trump had all those Russian spy-hookers soil was one that Barack and Michelle Obama had slept in when they'd come to Russia on a state visit. Its just so petty and spiteful, just so... Trump, isn't it? And that's what sells it to me, that's what gives it the ring of truth. the petty spite.