I said before that I was going to clear the backlog a bit by not buying any new models umtil I'd painted the contents of Forgebane. In my defence I have been a good boy and held to that. The case for the prosecution is that so far my progress on Forgebane has been to basecoat the Cryptek. The bugger of it all is that as soon as I swore off buying new models I found myself really, really inspired towards the Deathwatch and now I desperately want to buy more Kill-Teams.

So I need to make headway on Forgebane. This week's project, therefore, is to build and paint one of the Knight Armigers aka the models I bought this set for in the first place.

As to colour scheme: I spent a while trying to come up with my own colour scheme but, ultimately, nothing I scribbled down appealed to me as much as the deep forest green of House Cadmus: 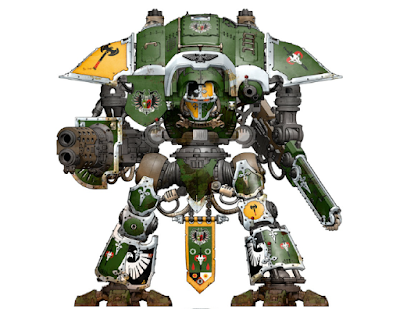 I know I'm usually one for bold, bright colour schemes but I like the moody shade of green and how it contrasts both with the black and the brighter yellow. I just like green in general, really, and it'll make a nice change from the endless sea of black and red I've been painting recently.

I also like their background. Their homeworld of Raisa is infested with Beastmen and every year the Knights gather together, get into their war machines and engage in a huge cull. The knight who makes the most kills becomes the leader of the household for the next year. They also have a convenient xenos-related grudge having lost the better part of their fighting strength during the Tyranid invasion of Gryphonne IV which is useful for a force that will be allied to my Deathwatch, at least for the moment.

This will also be the first Lord Of War I've ever painted, a whole part of the game that I've been ignoring for editions opening up to me. Fun times.
Posted by James Ashelford at 09:00 No comments:


Okay, its been a while so what we got?

Well, Wrestlemania happened and so did Takeover: New Orleans. One of these shows was better than the other. I was very down on Wrestlemania this year. The disappointment started early with Asuka losing her match and her undefeated streak. I genuinely thought they were going to have her win and do the Brock Lesnar thing and hold the title Wrestlemania to Wrestlemania and have her drop it to... oh, probably Bailey.

Instead they had Asuka lose to Charlotte and (to quote a favourite sentiment of Jim Cornette) I don't see where the money is in this? They have spent so much time investing Asuka's undefeated streak with the proper weight and mystique, they allowed it to run so long it long ago beat Bill Goldberg's all time record.

And then she loses on her first big-time match on main roster.

Where's the money? Where's the money in breaking her record for Charlotte who is already over, already respected and a multiple time title holder? It doesn't make sense to me.

And the hits kept on coming. Brock Lesnar's interminable part-time Universal Championship run lumbers on for reasons we discovered the next evening when Lashley made his triumphant return to Raw. I can only hope the rumours are wrong and Lesnar is going to drop at the Greatest Royal Rumble instead of making us wait for SummerSlam. Nakamura/Styles was somehow a lot less interesting than the famous match they had at Wrestle Kingdom a couple years back just before they jumped ship to WWE. I really thought that was going to be an all-time classic.

And I just cannot get over the whole bizarre scenario of hiring the most famous female combat athlete in the world and having her debut in a match against a semi-trained 41 year old mother of two featuring two semi-retired old men. Really, Triple H and Angle should have been their own nostalgia match and at least let Rousey's first match be all-women.

Takeover, meanwhile, could not have been better. Worth the money I didn't pay for it (we use my housemate's Network account) for Gargano vs. Ciampa which ran just over half an hour and was amazingly intense. The Six-Man Ladder Match for the North American Championship was amazing and I swear I have never expected be so hyped for the introduction of a mid-card title.

On a happier note: Paige is the new General Manager of Smackdown Live! A female authority figure for Steph to bump up against. I know they want Rousey to be the female Stone Cold but I really think someone in a management position needs to exist who can stand up to her.

I also really hope this isn't just a stunt appointment for market Paige's biopic. I mean, obviously they're going to use it like that but I hope it outlasts the movie's release.

DC finally made announcements about the post-Metal Justice League comics beyond the No Justice stuff they already announced. There's a new Justice League Dark with Wonder Woman and Zatanna which is interesting but the real news for me is Justice League Odyssey which not only has Cyborg leading a team featuring Jessica Cruz and Starfire but its going to be drawn by Stjepan Sejic, the amazing artist of Sunstone and a recent really good run on Aquaman.

Roseanne came back and every time they interview John Goodman he looks like one of those hostages assuring their family they're fine and being fed and everyone is bein provided proper medical assistance. I grew up with that show and didn't know any of the stuff about Roseanne herself going a bit made and tyrannical towards the end of the original and now she's a bloody Pizzagate truther!

Oh, well, not like I'm starved for television I want to watch and keep not finding time for between the Arrowverse shows, the Marvel-Netflix stuff, Voltron: Legendary Defender, and that Lost In Space reboot.

So, the solo Flash movie that became a Flashpoint movie is now a solo Flash movie again because DC figured if they were going to make another shit movie they might as well make the version of it that doesn't basically require expensive guest stars.

I have developed a visceral hatred of Sam Ovens, a man who hawks business webinars in YouTube ads. Somehow I manage to get one of his ads on every video I watch and I watch a lot of stuff on YouTube. My only respite from his voice is the strange banjo accompanied adverts for toilet nowl nightlights.

Marvel's upcoming Death of the Inhumans event is coming in July. I don't care. I genuinely do not give a shit. I have tried to care about the Inhumans since Inhumans vs. X-Men. I read Royals, which was okay, and Black Bolt, which was great but as a larger concept I can't say they grab me at all. “The X-Men but even more uncomfortably eugenic” isn't that good a pitch and I can't say I'm surprised we've reached this point.

If this latest bullshit event has any negative consequences for Kamala Khan words will be had.

Donald Trump has decided to pick a fight with the US Post Office because he doesn't understand that Amazon's free delivery isn't free to Amazon. He genuinely seems to believe that Amazon just declares they aren't paying postage and gets away with it. Don't get me wrong, Amazon is pretty evil and I don't doubt this is something they'd try if they thought they had he chance but the simple reality that should be apparent to anyone with a functional reasoning brain (or a White House full of functional reasoning brains they can consult at any hour of the day or night) that Amazon pays the postage fees out of their profit on the sale.

And that's the only Donald Trump news I want to do in this one because its Trump and there's a scandal a day with that guy.

Hopefully he'll be impeached or do something to terminally disappoint his personality cult of heavily armed, emotionally unstable racial supremacists some of whom, I'm told, are very fine people.
Posted by James Ashelford at 05:00 No comments: