The return of "my" Doctor


Nostalgia is a funny thing. I got into Doctor Who when it was nothing but a nostalgia object. It was the mid-1990s, the show was off the air except for a dwindling number of repeats on BBC2 (we didn't have Sky so no UKGold and no endless repeat cycle of old stories for me); videos came out every other month or so and my pocket money went on Spider-Man comics so I didn't get Doctor Who Magazine.

“New” Doctor Who at that stage meant one thing: Virgin Publishing's New Adventures novels, books whose back covers promised adventures “too broad and too deep for the small screen”. What this generally meant was stories with too much gratuitous sex and violence for Saturday teatime BBC1 but I was a teenager so it was all the same to me.

And now Big Finish are bringing that era of Doctor Who back. Again.

This is actually attempt number three. In the early years of their Doctor Who Main Range they tried a couple of stories featuring Bernice Summerfield and the grown up space marine version of Ace (long story but basically an attempt to rid Ace of teenage angst by putting her in a black latex bodysuit. Did I mention the gratuitous sex stuff?) that just didn't hit home for me. In fairness, its not like that version of Ace worked even half the time.

Attempt number two came in the form of novel adaptations with the company adapting some of ranges high points including Love and War, The Highest Science, Damaged Goods, All-Consuming Fire, Theatre of War, Nightshade, Original Sin, and Cold Fusion as well as some Fourth Doctor Missing Adventures. By and large this went a lot better and I was genuinely disappointed when the range ended due to low sales. The adaptation of Russell T. Davies' Damaged Goods was particularly good (a bit of an improvement on the novel, actually).

Now Big Finish are bringing back the team of the Seventh Doctor, Chris Cwej and Roz Forrester in four original stories. The important thing for me is that only one of these stories is going to be written by someone who worked on the original novels, the other three will be written by writers of a later generation of the fan-industrial complex.

Why this interests me is that the nostalgia filter is going to be applied for Doctor Who that I was around for but that has a lot more distance than... for instance... The Tenth Doctor Adventures Big Finish have done. The last New Adventures novel was published in 1999 and I'm interested in seeing how a new generation reinvents things. Its an interesting discourse what later fandom decides to focus on when they go back to things, what they choose to erase or emphasise.

Will anyone try to address that bloody awful idea the Virgin authors had where they kept recasting old monsters as creatures from the Lovecraft mythos?

Posted by James Ashelford at 07:00 No comments: 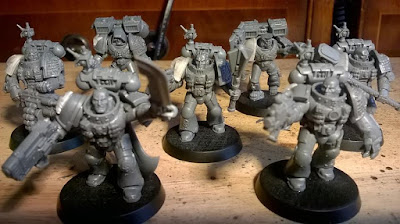 This is the Deathwatch unit that will accompany my Ordo Xenos Inquisitor Laurento Hex on his adventures with other armies. I usually tailor my Veteran squads to a purpose like killing infantry or tank hunting but since this will the be whole of a detachment (plus a random character to stay game legal) they're more geared towards taking on all comers with a deliberate close combat bias.

I've got a Watch-Sergeant with combi-plasma and xenophase sword, a power fist, a power maul, a heavy thunder hammer, a frag launcher and two Vanguard Veterans with bolt pistols and power weapons (a sword and an axe). Also, thanks to various lovely sellers on Shapeways, the unit has a nice spread of different chapters with a Relictor leading an Invader, a Son of Guilliman, a Death Spectre, a Lamenter, a Rampager and a Disciple of Caliban into battle.

I have to admit I get a silly amount of pleasure from deciding what chapters each Kill-Team will contain. It a peculiar pleasure but you take what you can get, you know?
Posted by James Ashelford at 07:00 No comments: