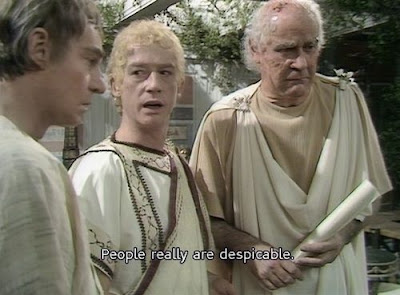 If you want to know how great an actor the late John Hurt was, track down a copy of I, Claudius and watch his performance as the Emperor Caligula.

With the greatest respect to the man, John Hurt was not a particularly beautiful man and you'd think that would discount a man from playing Caligula, a notoriously attractive man. Hurt brings such power to the role through his performance that you can see it. His fey, breathy delivery conveys the charisma of the man whilst his haughty air lends a smouldering sexual presence to the role. He litters his lines with little breathy pauses as if unsure of what he's about to say next, second guessing himself constantly as he decides what best to say to his own advantage. He's twitchy, just a little as if he's constantly holding it in except when he explodes in anger or panic. 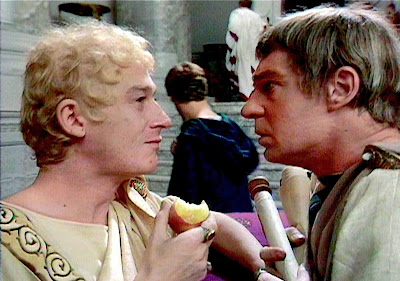 The scene where Caligula makes his first proclamations as Emperor is a tour de force. After several episodes of being a manipulative snake masterfully pulling the strings of the ailing Tiberius, Caligula cuts loose. He rants and rambles, loses track of the conversation, drifts off into asides about how he resents Claudius having so much more hair than he does. Its a fascinating descent into madness, one of the best scenes in the whole series.

Now, this is just one role in a career of great roles but I do think it conveys the sheer range the man possessed.

Now, we'll just wait for Brian Blessed to die and we'll talk about his turn as Augustus.
Posted by James Ashelford at 10:00