I'd never seen Space Seed, you see. The housemates and I were watching The Wrath Of Khan and I mentioned this gap in my knowledge. Naturally, we then had to watch Space Seed...

I had high hopes for this episode or, at least, higher hopes than I should have had. Now, for the most part it was exactly what I expected: the Enterprise stumbles across Khan's sleeper ship, wakes the fella up, he hides his evil semi-competently for about quarter of an hour, tries to take over the ship and gets promptly defeated before being dumped on Ceti Alpha Five with his followers and his beloved wife. In most regards it was exactly what I expected.

So why was I disappointed? Why did my housemates look so gleeful when I slotted the DVD into the player?

Well, it's the beloved wife, I'm not going to lie. You see, what I had imagined went down in this episode, based on Khan's motives and dialogue in the movie, was that he met someone on the Enterprise, they fell in love, she talks him down from whatever evil plan of evil he was trying to execute and they retire to live happily ever after on the planet of the brain-eating earwigs. 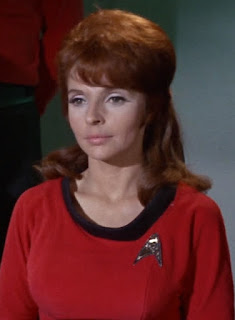 Lt. Marla McGivers, ship's historian and a hot mess of 1960s gender issues. The woman is obsessed with the big, butch manly men of history. She has filled her quarters with endless paintings of Roman centurions and other warriors. She becomes infatuated with Khan before he's even awake on the tenuous logic that he's a 20th century Sikh and that makes him a great warrior (so add some 1960s racial issues to the aforementioned hot mess). Though the whole scene where he gives her the choice “Go or stay, but do it because it is what you wish to do!” is a nice little number where you can sort of see what she sees in him... well, it's far outnumbered by the moments when he roughs her up, tortures her colleagues in front of her and transparently manipulates her to follow his agenda all while she simpers submissively.

And then she decides to settle down with him.

I felt I was being realistic. I didn't expect this episode to be anything more than a run-of-the-mill TOS episode with what I knew to be a superlative actor in the guest villain role but the sheer awfulness of Marla McGivers genuinely shocked me. Okay, Star Trek is of its time and that's some defence but it does far better with female characters in so many other episodes that screwing up this badly here genuinely baffles me. Even the functionally identical subplot with Carolyn Palamas in Who Mourns for Adonais? gives that character far more agency than McGivers gets here.


I just can't connect the reality of McGivers with how Khan talks about her in the film. Eh, the memory cheats I suppose.
Posted by James Ashelford at 05:00 No comments:

Tomb It May Concern (Lessons Learnt)


I think I'm starting to get the hang of Tomb Kings. Oh, I got crushed yesterday but every time I roll the army out I last a little longer and a little better.

This time round I finally worked out how to use my chariots: slamming an early flank charge into a weak rank-and-file unit (Night Goblins who had already spent their Fanatics), who I broke, ran down and overran into another unit. That other unit, a 30-strong Squig Herd, smashed me up but I took half of them with me. Skeletons Of The Match, right there.

I had a good idea that didn't work, sadly, but worth remembering. I tried to bring my Tomb Swarms up between two Night Goblin units to tempt out the Fanatics. If they had emerged odds were that the Fanatics from either unit would go through my Swarms and into the other unit. Sadly, I rolled a misfire and stayed underground. In hindsight I should have stayed patient and tried the tactic again next turn rather than charging in with my ranked units and Ushabti but... eh, hindsight.

My Hierophant needs a ward save. I already pay for one for my Tomb King but I'm starting to think those points would be better spent keeping the Hierophant alive. Every one of my three defeats have come off the back of the Hierophant dying so old Crookback is getting the Talisman next time and Amanhotep can look after his damn self.

I think I need to make some economies and get some Skeleton Archers in. Right now the army has a grand total of eleven bows, which is a mighty waste of one of the armies big advantages: shooting without modifiers. Okay, without modifiers on a mediocre ballistics skill, but still.

I might get rid of the Carrion. They're actually pretty rubbish. The original idea was to have them flying along by the side of the Necrosphinx to back him up but its not working out. They aren't that resilient, they only have two wounds. They're pretty much just filler, even if their suicide charge at the first Night Goblin unit freed up a channel of assault for the chariots. Basically, they exist only for the times I need something fast and expendable.

My Level 1 Liche died relatively early on, taking the Incantation of the Desert Wind with him, thanks to which I'm starting to think it's nowhere near as essential as I assumed it to be. Upon which subject, the augments on the Lore of Light are amazing so she's earned a semi-permanent slot on the order of battle.

Now, to get some painting done so my army can be more presentable for my next incrementally less embarrassing defeat.
Posted by James Ashelford at 20:49 No comments:

On Tomb Kings and the learning curve

Tomb Kings are a difficult army to learn: they're slow, they're highly dependant on their magic, more even than Vampire Counts; and, even their strong stuff can be killed off just by being outnumbered at the end of a fight. They both suffer and benefit from a need for synergy between units that I'm just not used to, though longtime Empire players might have better luck with it than me.

Just to be clear: I love this. I love the learning curve on this army. I can usually get a bead on how an army works pretty early on but this one is giving me so many chances to experiment before I find my feet, which I hopefully will.

This afternoon I'm having my third game with the Tomb Kings and after my first two crushing loses I'm looking forward to testing out some new units and tactics on my way to probably my third crushing loss.

This will be my Tomb Kings' first 2,000 points game and with that extra space comes the confidence to use my Tomb Scorpion's Entombed Beneath The Sands rule unafraid that it'll emerge somewhere useless again. I'm taking a third Liche Priest to road test the Lore Of Light as well as a Casket Of Souls, though I admit that five magic levels and a bound spell might be too much magic even for this army. I've also finished building my Tomb Guard so I shove my Tomb King in there and keep the Necrotect with the Skeleton Spearmen so I have a buffing character in both infantry units.

And I really, really need to remember that the large constructs need support when they move in for the kill. They're strong but they're slow and that Unstable rule is a bastard, especially as I'm facing Matt's Orcs & Goblins. I'm pretty sure I'll lose. Matt has strength, speed and Fanatics on his side, not to mention experience but it will be a learning exercise and that's fun for me all by itself.

Plus, now I'm up to 2,000 points I can debut my Tomb King. After the dismal failure of my Tomb Prince Rastaph to cleanse the stone mines around Mortis Tarn of their Dwarven occupiers it is time for his honoured father Amanhotep the Intolerant to take command as a horde of greenskins bears down on Zandri from the barbarian north. At his side marches his daughter, Rastaph's sister, Zandri's Priestess of Ptra, Oili (aka my Lore Of Light wizard), his favoured child.

So Rastaph licks his wounds in Zandri, snubbed by his father, waiting to see if he will have to welcome his sire home in glorious victory or ignominious defeat.
Posted by James Ashelford at 09:39 No comments: 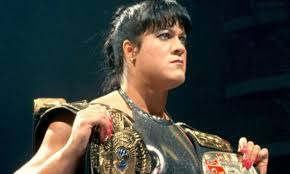 This past week one of the greats of professional wrestling passed away.

On Wednesday, Joanie Laurer, known to wrestling fans around the world as Chyna, died at the tragically young age of 45. She debuted back in the Attitude Era as Triple H's bodyguard; was at one time in consideration to become the first ever female World Heavyweight Champion; actually was the only women ever to hold the Intercontinental Champion; and, was the first of only two women to ever appear in the Royal Rumble.

She was a big, muscular woman (a professional bodybuilder, in fact) working in wrestling when blonde hair and implants were basically part of the uniform. She almost always held power in her storylines and had dignity even when she didn't (with the exception of that... rather uncomfortable angle with Chris Jericho). She was a part of D-X in its most legendary form which alone makes her a major figure in the Monday Night Wars. She competed on a level with, and even feuded against, some of the best male wrestlers of her day. She even competed in a few inter-gender matches that weren't horrible to watch, even if one of them did seriously bring into question whether WWE's bookers know how vaginas work.

Like Trish Stratus and Lita she was one of those great female wrestlers who was better than the women's division of their day ever deserved, one of those who worked to elevate the form even as the industry itself sank into valuing female competitors only for their looks.

She was the Ninth Wonder of the World and we were privileged to have the glimpse we got of her.
Posted by James Ashelford at 05:00 No comments: