Norba Miniatures is a Spanish company that makes models compatible with Warhammer Fantasy and a few other game systems. In the past they've made a lot of miniatures I liked the look of but used a terrible resin that was far too fragile for my taste. 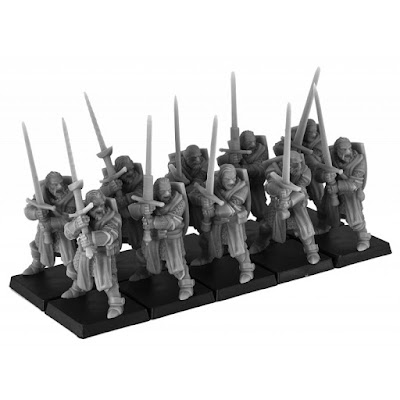 Enter their “2nd edition” project. I went to their website basically just out of curiosity and discovered that they'd dumped the resin and moved to plastic. Unfortunately I can't find any reviews of the new products so I'm taking a chance and throwing the dice on a box (or possibly bag) of ten Not-Questing Knights On Foot.

If it works out I am going to waste so much money on their Not-Bretonnian and Not-Chaos Dwarf range. And if it doesn't? Well, I've made worse financial decisions in my life.

No hobby points for my for January


I failed. Some last minute work commitments got in the way of finishing the Angels of Defiance Master. He's nearly done, just needs a little work on the metallics but, as I said, I didn't get my Warhammer Resolution for January done. Didn't finish any other projects before (God help us) Brexit Day rolled around. So, no bonus points and I've lost those ten points for finishing the twelve monthly projects, as well.

When faced with moderate failure there's only one solution:

GO BIGGER! TEMPT FATE WITH EVEN GREATER POTENTIAL FOR FAILURE! 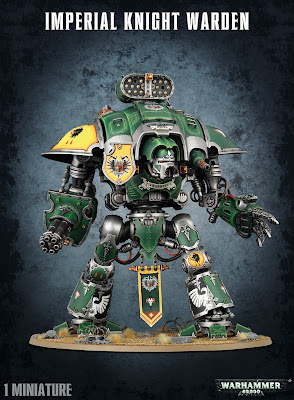 February's Hobby Resolution is going to be to paint an entire Imperial Knight Crusader. That's the one with the battle cannon and the gatling cannon. I got the model cheap on eBay a few years ago and havent so much as touched it until now. Yesterday, I built the big boy and I am so jazzed to get to work on it.

I'm going to be painting the model in the colours of House Cadmus, which is the colour scheme from the box art above. I love their background as, basically, fox hunting toffs on an epic scale (well, a 28mm scale). Its a relatively simple colour scheme but striking, its also not predominantly dark red or black which I'm doing my best to avoid right now out of sheer fatigue (Deathwatch, Word Bearers, Cult of the Bladed Cog Genestealer Cults, red and black are FAR too common in Warhammer 40,000).

A few other... not “goals” but intentions for the month include aciding bathing my Blackstone Fortress Traitor Guard because I have a much better idea of how to paint them than I did originally; building some of the Mechanicus kits I got for Christmas; and, choosing a Chaos Legion for the very small number of Chaos Marines who'll be part of my Lost and the Damned army.

So, let's march hoprefully towards inevitable failure...
Posted by James Ashelford at 07:00 No comments: