Black Templars fans and the fifth stage of grief 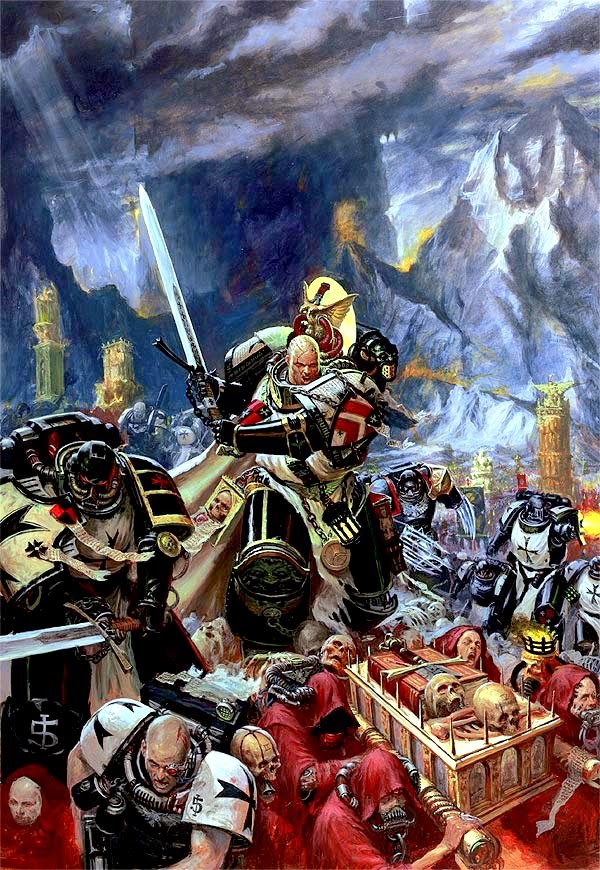 Necessary preface: I am a Black Templars fan. It was the stark black and white visual of Black Templars that got me into 40k; my first army was a successor chapter to the Black Templars; I was there at the front of the queue the day Codex: Black Templars was released and I picked up a hell of a lot of those splash release kits on the day. I like Black Templars, Black Templars are great, please remember this when I say the following:

I'm not saying it wasn't natural to be a bit pissed about this but its been a year now, folks. Perhaps it is time to let calmer heads prevail and admit that we, the BT fanboys and girls, benefited from this decision in many ways.

For one thing the fact that Black Templars were the only Space Marine faction not to get a 5th edition book is indicative. Space Marines are GW's moneymaker, any Marine release sells like hotcakes so the fact we went a whole edition without an update does point towards GW being out of ideas for them. And, really, who can blame them? Where was there to go they weren't already going with other armies?

I'm perfectly serious: the monk and knight imagery is the cornerstone of the Dark Angels and Grey Knights while the heavy close combat bias is explored with Space Wolves and Black Templars. Then there's the fact that most of the Black Templars' background and mechanics isn't about what they have but what they don't: they don't have discreet Scout Squads, they don't have Librarians; and in the 4th ed. book they didn't have Veteran Sergeants or Devastator Squads for some reason.

Their extras were the Crusader Squad and the Emperor's Champion plus some special characters, all of which are retained by the new list. As well as that we now get Orbital Bombardment on the Chapter Master; Honour Guard; free Iron Halos; Masters of the Forge; access to Drop Pods; Sergeant upgrades; Vanguard and Sternguard Veterans with all the trimmings; Ironclad Dreadnoughts; the Legion Of The Damned; Stormtalon Gunships; Devastator Squads; Thunderfire Cannons; Whirlwinds; Hunters; Stalkers; Land Raider Redeemers and Stormraven Gunships.

Oh, and Centurians if you can stop yourself from vomiting long enough to paint them.

Okay, maybe not all of those options meld well with your vision of Black Templars (they certainly don't all meld well with mine) but that's a whole list of stuff there we didn't have access to before. Things have changed, the replacement of the vow system doesn't quite work for me, I must admit, but I don't see where people on the internet get the idea the army is somehow unplayable or destroyed as a concept from this change. Space Marines are Space Marines, the mechanics don't change all that much between books because the stats are pretty much set.

You know what clinches this for me as a good thing? Being part of Codex: Space Marines means that we're 100% guaranteed regular rules updates. We'll never have to go an edition without a book and I don't foresee GW removing the army from the next book because it doesn't materially benefit them to do so.


And with that fact in mind there might actually be a hope for a proper Black Templars box set some time down the line given how... shall we say “mixed”?... the last set of offerings were.
Posted by James Ashelford at 05:00