I got into this conversation with a guy in GW the other day about Space Marine chapters and he took a position I disagree with. You see, he insisted that there was nothing interesting in the Chapters represented by Codex: Space Marines and he far preferred the variant codices because he found the variants to be more interesting. “Vanilla” was the word he used to describe the Codex chapters. “Bland” also came up. I mean, all power to him, its his view and how he interacts with the background but I've always taken issue with the basic premise.


So here are with ten chapters I think have background just as interesting if not more so than bishonen space vampires, the 80s hair metal marines or heretics in skirts: 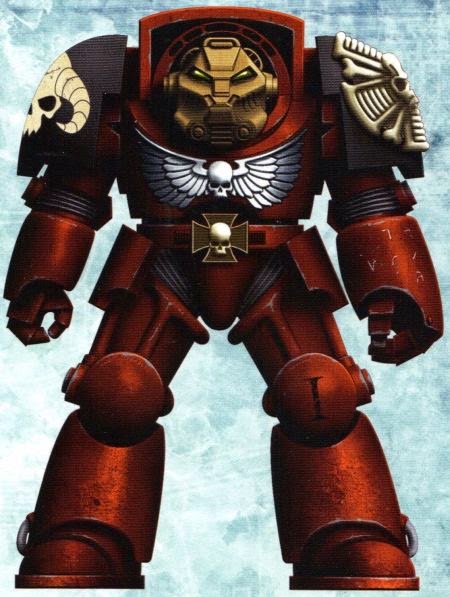 A weird one to start. The Exorcists maintain three scout companies instead of the usual one because there's an unusual level of attrition in their training regimen. This attrition takes the form of strapping the scout down, summoning a daemon to possess the poor kid and then waiting to see if he can exorcise himself simply through the power of faith. They're masters of arcane lore though they aren't purely tasked with fighting Chaos, they're generalists like most chapters. They aren't like the Grey Knights where it actually feels weird to play a game with them against pretty much anything besides Chaos Marines and Daemons. 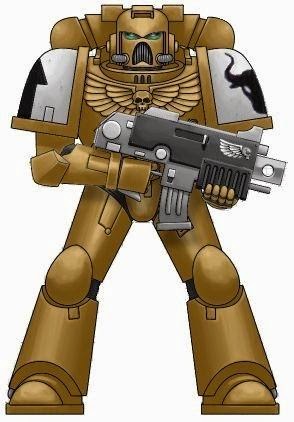 Ugh... look, this is complicated because these guys have a lot of conflicting background but I'm particularly going with the version in Labyrinth Of Sorrows. These chaps have a Greco-Roman vibe to them, some Macedonian bits (the 1st Company are called the Lion Guard) and what seem to be Jamaican accents. They aren't big on tactics and prefer frontal assault in pretty much all cases. They like axes and seem generally rather cheerful. To be honest I was disappointed when the Imperial Armour books had a completely different chapter turn up under a similar name but at least there are shoulder pad upgrade kits available through Forge World for what's actually quite a hard chapter symbol to freehand. 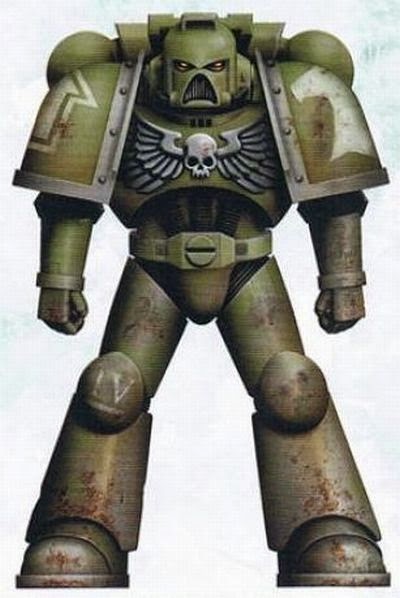 The Raptors have always been on the back foot. They were formed in the Second Founding from the already chronically under-strength Raven Guard Legion. Since then, through attrition and back luck, they've been under-strength and poorly supplied for pretty much the whole of the last ten thousand years. Far from being staunch codex-adherents they tend to be rather more pragmatic in their tactics, being used to making do with what they have. They're more willing to use camouflage on their power armour or take direct command of Imperial Guard regiments to achieve their mission goals (bit dodgy, that last one).

Visually, as you can see, they go for a more subdued palate than the usual bold Space Marine colour schemes.

The Sons of Medusa 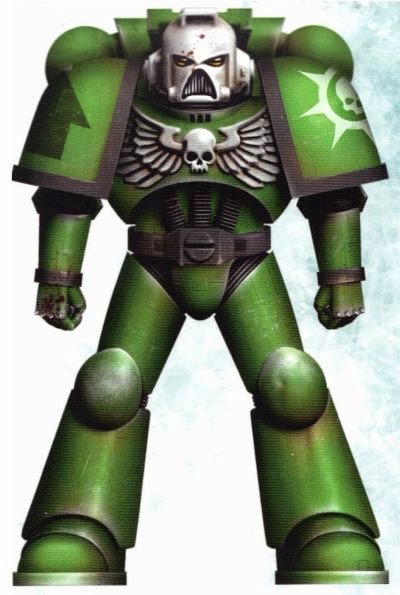 Even for an Iron Hands successor this chapter is well in bed with the Adeptus Mechanicus. They're adherents to the Cult of Moirae, a banned and suppressed Mechanicus sub-cult which is an unusual form of radicalism in 40k. Its usually Chaos or nothing.

Plus that emerald green and white colour scheme looks horrible on one marine but looks absolutely amazing if you can pull it off consistently on a whole army. 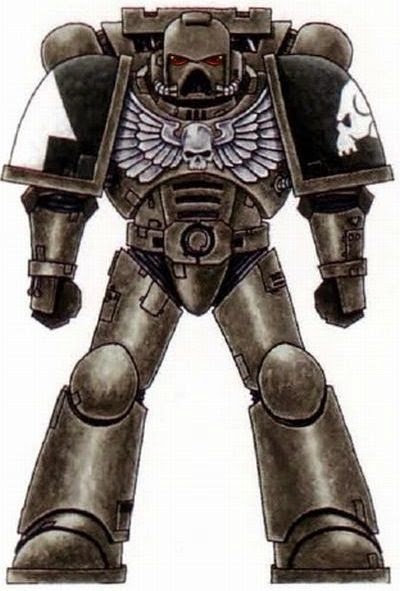 A good one for people who like converting their miniatures. The Relictors have this habit of taking trophies from their dead enemies, usually weapons. Problem with this is that sometimes those weapons are tainted by Chaos and recently the Inquisition has started getting a bit miffed about this. They aren't quite a renegade chapter and they don't see themselves as anything other than loyalists so they're a little miffed with the Inquisition for poking their noses into the chapter's private business.

Admittedly the average Relictor looks a bit dull, the all-over grey isn't too inspiring but modelling them with Chaos and xenos weapons would make for some interesting variety. 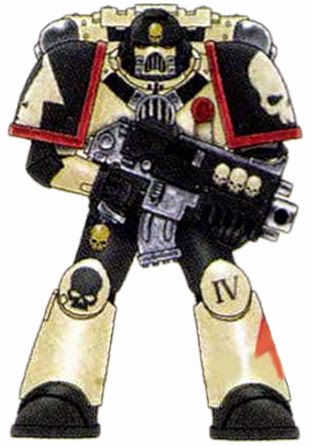 The Mortifactors are morbidly obsessed with death: they cover the walls of their fortress-monastery in skulls and even measure the skull of every battle-brother to work out if it'll fill any inconvenient gaps in the décor when the time comes. If you have any Warhammer undead spare parts lying around you can use them to embellish your marines. 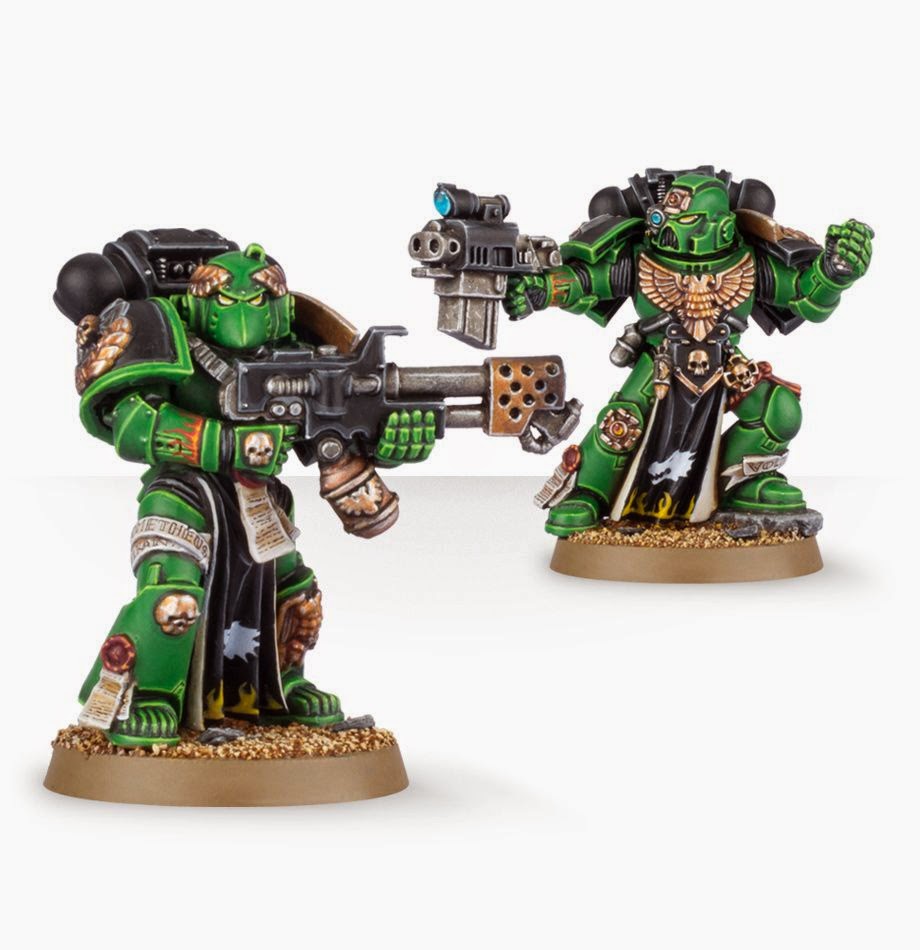 With the Salamanders it all boils down to one thing with me: they are closer to humanity than any other Space Marine chapter. With most Astartes drama comes from how aloof from human concerns they are, how much of their own humanity they've sacrificed for a greater good. The Salamanders, by contrast, live amongst the civilian population of their homeworld between missions. They're connected to the people of the Imperium in a way that's hard to imagine in many Space Marines.

The Carcharodons (aka Space Sharks) 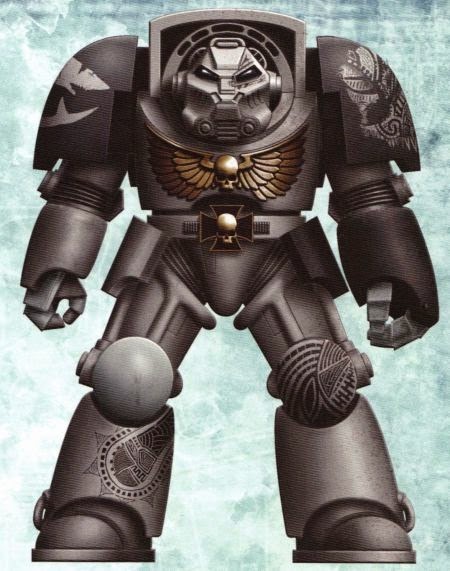 Polynesian Space Marines fighting Lovecraftian horrors in deep space. It sells itself. The Charcarodons operate outside Imperial borders in a self-sustaining fleet, going without resupply for decades. I love the angle but their armour is actually the real hook: the varying tones of grey is actually quite visually interesting even before you add in the Polynesian-inspired markings etched onto their armour. A good challenge for someone wanting to test their freehand skills.

They tend towards bloody boarding actions so there might be a case for using Black Templars rules so you can have chainsword-wielding loonies on foot without the need to take a transport.

The Mentors (aka Mentor Legion) 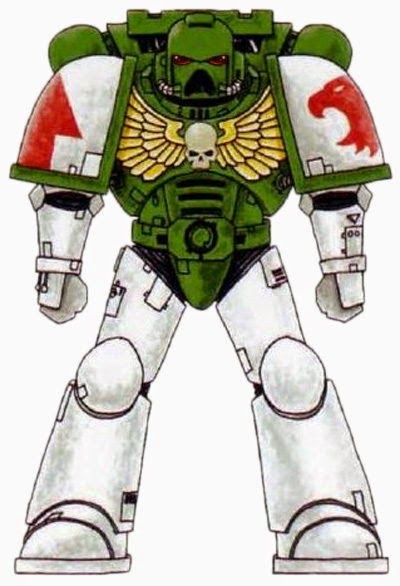 Okay, a living nightmare to paint but since their background suits them more to being an allied detachment than a full army that's not such a problem. The Mentors tend not to deploy in chapter or company strength but send squad level detachments to work with other armies. These detachments act as both advisors and observers, studying the tactical doctrine of the armies they fight alongside. That in itself is an interesting angle: Space Marines who don't see themselves as all-knowing in the ways of war but who are on a self-mandated learning exercise.

Still, you're going to have to paint a lot of white. 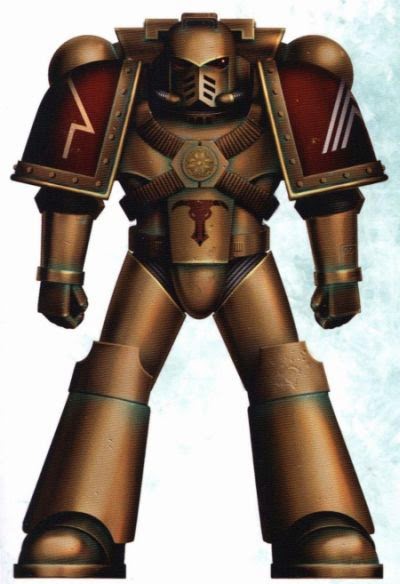 Bully boys for the High Lords of Terra, basically. There was another chapter called the Minotaurs (who might or might not have been the Brazen Minotaurs from earlier) who disappeared in transit. The modern Minotaurs, who act suspiciously different from the originals, tend to deploy as a whole chapter to perform brutal attrition warfare, mostly against traitor or rogue Space Marine chapters. Their rules in the Badab War books even give them Preferred Enemy: Space Marines and wouldn't it be nice to have an actual rationale for all those Space Marine/Space Marine games you tend to get stuck with playing 40k?


(All images are, I believe, taken from GW publications or images of 'Eavy Metal paint jobs used for advertising purposes. If I have, in fact, used anyone's personal artwork I apologise and invite them to drop me a comment into the most recent post on the blog at the time they notice and the image will be removed).
Posted by James Ashelford at 05:00