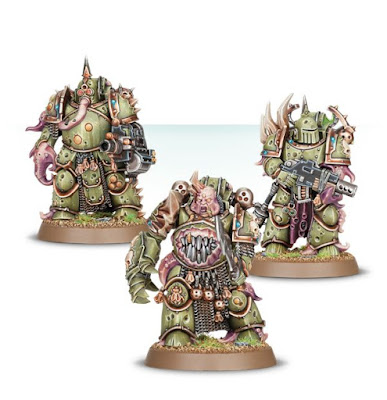 It really should have occurred to me why this box exists. I mean, you get seven Plague Marines in Dark Imperium and the Index entry allows you to take them in fives so, of course, this box exists to allow you to bulk out the DI unit to two five-man squads.

Also an easy way to bulk out to get two of the three compulsory Troops choices for the new standard force org which is about 50% of the reason I'll be picking up a set (that and they really are nice sculpts I want to paint).

Oh, and I want that blight launcher: Assault 2, Strength 6 for -2 AP and D3 Damage re-rolling ones to wound? Yes, please.

I'm still not sure what the three model Intercessor and Reiver boxes are for since you get ten of the first in Dark Imperium and a ten model box of the latter is being released imminently but that realisation will probably strike about fifteen seconds after I press “publish” on this post.
Posted by James Ashelford at 10:00

Yes, that Blight Launcher is going to be handy. With DG you need to close fast and hit hard, as I discovered in my bloody brawl with Murray last night (we fought to an inconclusive draw but I started pulling back heavily at close range).

Definitely. Also, a second unit of Poxwalkers seems to be a good addition I'm planning on making to soak up some of that ranged punishment.