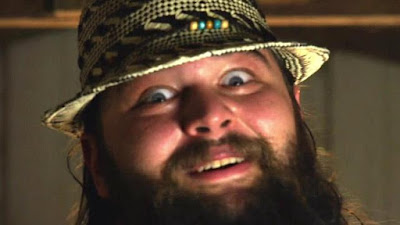 You get a lot of talk amongst wrestling fans, smarks on the internet especially, about people being buried. A lot of the time I find that it tends to be a little over-diagnosed, too often used as an overreaction to someone being beaten on PPV a couple of times.

You see it a lot with John Cena feuds. He beats someone at the end of the feud and people will say he's burying his opponent. Okay, there is the problem that after a John Cena feud there's very few ways to go for the other wrestler but down. He's the biggest face in the company, after all, and if nothing else the US Open Challenge meant that they could go from him to higher things in terms of belts. It didn't always work out and some right stupid booking could take hold (Rusev joining the League Of Nations, for instance, the biggest waste of talent on the roster not to be the Social Outcasts).

Its not what I'd call burial, though. Its not the sort of long, consistent run of bad booking like, for instance, Bray Wyatt's seeming inability to win at pay-per-views these days.

Because he just can't win these days. Take Backlash a few weeks ago: he seemed strong for a moment when he was beating Randy Orton up in a corridor and then standing unopposed in the ring insisting on the ten count so it would go down as a victory to him. He looked dominant, he looked scary, he looked like the figure he presents in his promos.

Then Kane, who simply does not need the win and isn't feuding with Wyatt, comes out so a match can go ahead and beats Wyatt in short order.

Wyatt is popular, he is over, and he keeps losing high-profile feuds. Right now all he has is the fact that he cuts really, really good promos bit with nothing to back them up and that can't last. For months on end he has either lost big matches or fed one of his minions to the opponent...

… and he's all out of minions. Harper's injured, Stroman got drafted to the other show and Rowan... I'm not even sure. Wyatt is one of the best heels WWE has at the moment, one of the best talents to come out of NXT and they are utterly wasting him.