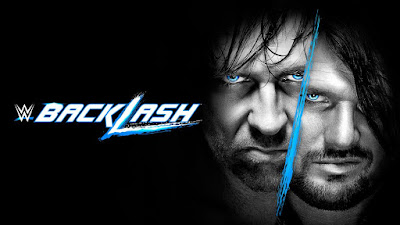 [spoilers for this past weekend's pay-per-view results]

Okay, so the name of the game here was to give Smackdown Live's pay-per-views legitimacy: they got the first brand split PPV; they debuted their new Women's and Tag titles on the show; and, the fantastic ending to this show certainly tells us they intend to make these brand split PPV as consequential as the Big Four.

Aside from that, the slightly shorter two and a half hour running time is probably a good idea if there are going to be twenty-something of these things a year. You need to keep an eye on how much of your audience's time you're taking up with these things.

So, on with the matches (winners in bold):

First off, one of the few complaints I have about this show (and my only real complaint about this match) is that Naomi submitted too easily to Natalya's sharpshooter. Natalya barely had enough time to lock it in before Naomi was tapping her hand on the ring. Aside from that, this was good. It started off as a mess because these matches always start off as a mess but as it progressed things the story got clearer.

I was, I admit, sceptical about Carmella getting a heel push where she keeps rushing in and beating up Nikki Bella in promo after promo. Seeing it in the package it looked like the bookers were writing a storyline for a much larger woman but when it was just Carmella and Becky in the ring at the end... it worked. Carmella got in a savage offence before Becky, rightly, turned the tables, took her to Suplex City (oh, it did my heart good to see that in a women's match) and took the win.

It had to be here. Since this was announced I think we were all sure it was down to her or Nikki, it just came down to whether the management thought a Horsewoman or a former champion would lend the title more legitimacy.

And they chose the Horsewoman. I think this was right, not only because I think a brand new title works better with a brand new champion but because the inevitable Four Horsewomen Fatal Fourway will be a bigger money match if everyone involved has held gold. Its just time, as well, Becky is a great worker and that way she was brought up for the Women's Revolution (egh......) meant she missed out on the NXT Women's Championship.


I've not got much to say about this one except that it was the right result. I genuinely think the Usos vs. Heath Slater and Rhyno is better booking than the Hype Bros vs Heath and Rhyno. My only real observation on the match? Zack Ryder is less of a wuss than Naomi since it actually took time for that submission move to make him submit.

(Please, please note I do not actually think Naomi is a wuss, she could kill me with her shoes).

Match of the night, no question. Started with aggressive matt wrestling from Ziggler and just got better and better from there. Surprisingly, and hearteningly, the crows were well behind Miz in spite of him being the heel, which I hope is a sign.

As pointed out in that fantastic (Work? Shoot? Who knows?) interview with Daniel Bryan, the Miz's style is very much the perceived WWE standard: steady and safe. And you know what? As Miz pointed out, he has never had a serious injury in all the years he's been in the business and he's never caused one either, as far as I can tell. If this is all build up to Bryan having one more match then I can't think of anyone better to carry Bryan through it. The whole angle also acts as mud in the eye to the internet smarks who are far, far too keen on criticising wrestlers for not putting their health at risk.


I love this angry Miz with something to prove and I love what the end of this match could do for him. You see, with camera angles and such I am not sure that Miz saw Maryse spray Ziggler in the eyes before getting the pin. Personally, I would have preferred Miz to win clean to prove the point to Bryan but this looks to be an ongoing feud so I'll take the trade-off of getting more matches like this.

WHY!? Why did Kane win this? What was the damn point of Kane winning this? There generally seems to be this huge fear in WWE management of letting Bray win on pay-per-view. I don't know why. You can't watch any entrance of his and tell me he isn't over: thousands of people hold up their phones to be part of his “fireflies”. He cuts amazing promos but that's all he does now.

Its the same pattern again and again: he cuts great, creepy, batfuck insane promos and theneither he loses on pay-per-view or he feeds a minion to his opponent. He just looks weak, there's no other word for it. He went into this match having given Orton enough of a kicking that he couldn't compete (to hide a real life injury, apparently) and then he got his arse kicked.

People like to talk about wrestlers getting buried and generally I feel they're too keen to use the term but this is what burial looks like.

Um... solid match, good result. I like where this Heath Slater angle seems to be going and Rhyno as mostly silent straight man really plays to the man's excellent comedy timing. Whether or not they have legs as a team we'll have to see.

I have been waiting for Styles to win a top tier title since he came on the WWE scene at the Royal Rumble and I was starting to doubt it would happen. Okay, he's only been with them eight months but he is a major signing. In hindsight, I genuinely think they waited exactly the right length of time, built to this wonderfully with his victory over Cena. The only downside is that I really would have liked Ambrose to have a better run but I'm hard pressed to disagree with people who say he became somehow less fun once he had the belt.

It was an amazing match, too. A slow start that built momentum and tension, lots of jumping off ringropes and turnbuckles. Yes, AJ won through a low blow but as much as I love him he is a heel and a brilliant heel at that, plus winning dirty allows Ambrose to hold on to some dignity in defeat.

Now, Raw, you've got a fortnight to get Clash Of Champions in order to beat this.