One of the most interesting aspects of the Black Legion is that they aren't just a corporate rebrand of the Sons Of Horus. Rather, whilst a lot of them originated in the Sons Of Horus, they're recruited from all nine traitor legions and a few other places besides. Aaron Demski-Bowden in his two Black Legion novels includes in his dramatis personae notes on which world the cast members were “born of”. Since their origins inform a lot of their personality and how they interact with other characters this is a useful list to have around.

I had an idea a few weeks aho to build some Chaos Marines using Betrayal At Calth Marines and Raptor heads. My idea was that being on the bottom of the ladder favour of the Gods-wise they wouldn't be that changed. Also because they'd be armed with bolters and so nothing I did to their bodies would be that visible. As you can see, it worked... sort of. 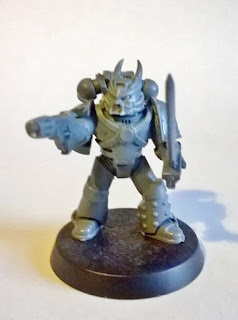 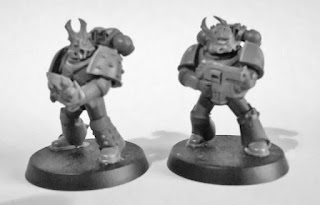 They look good but, probably because I used Raptors, they don't look as “generic” as I'd hoped. Instead, what I clearly have is a unit of Night Lords or, to put it another way, Black Legion born of Nostramo. So, not the replicable conversion I was hoping for but one that gives me a distinctive, characterful little unit.

So I started tinkering. I had a plastic Chaos Lord left over from Terminator Lord Cadre box I got to make some Forge World Plague Terminators and a set of MkIII Space Marines picked up cheap on eBay. The Chaos Lord ended up hybridised with some Chaos Terminator parts (I don't like any of the actual Lord heads) and a MkIII thunder hammer to make my General for missions too unimportant for Abaddon to deal with: 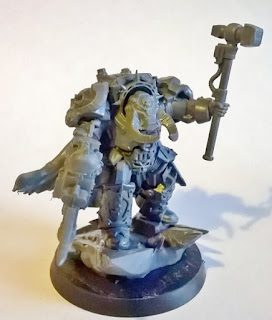 I rather like how the thunder hammer looks, even though I did have to try and get the two hands as far apart as possible so people wouldn't notice the different sizes. I am currently resisting naming him after Donald Trump. Anyway, he's born of Olympia because I rather like the idea of Abaddon noticing the ability of an Iron Warrior since that was the whole motivation for their fall (and because Perturabo is actually really, really bad at noticing the abilities of those serving in his legion because irony). 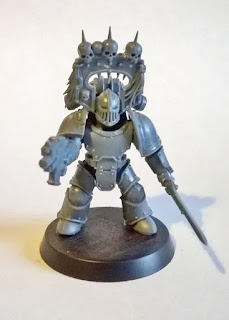 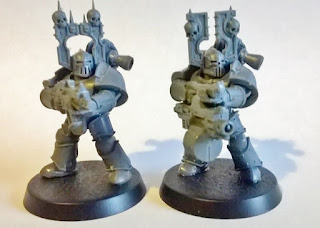 Finally, I traded for some spare Skullcrusher heads and turned the MkIII Marines into a unit originating in the World Eaters legion. I gave them a long range load out because a) I don't have enough close combat weapons for a whole MkIII squad and I'm not paying Forge World prices for parts that will be distorted beyond use and b) it occurs to me that an Iron Warrior would prize self-control so this squad would have to be not frothingly insane to keep their place in his warband.

He's getting recognition, it might have lightened him up but he's not going to any less of a controlling, micro-managing bastard. He's an Iron Warrior, after all.
Posted by James Ashelford at 10:00