A Lonely Place of Living: picking up the breadcrumbs 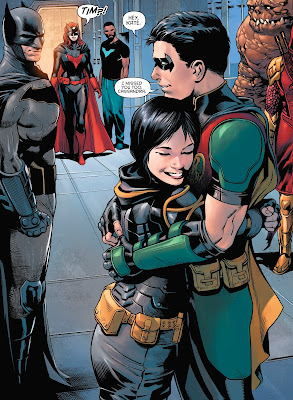 First of all, this moment is very, very sweet. One of the changes to Cass' character I do like in the Rebirth continuity is that she's a lot closer to the family in emotional terms. Back in the day there was affection, yes, but she always held herself a little distant. Also, someone whose primary language is physical should probably make more use of physical contact than she usually did.


Anyway, as sweet as this (and Tim and Luke being complete comp-sci nerds) is what I'm really interested in talking about is the latest little breadcrumb in the mystery of Conner Kent. Here it is:

So, more confirmation that Tim does not remember Conner. Considering that, contrary to my memory, the New 52 Superboy did use that name for a while this might indicate that he has been removed from history. After all, no one's so much as mentioned him since Rebirth started. Either that or Tim literally cannot connect the concepts of “New 52 Superboy” and “friend” which... is not totally out of the question.

The guy was an epic tool, let's face it.

However, this does suggest that somewhere deep in Tim's subconscious he does remember Conner, that there is an emotion tied to the name. A rather shippy, slashy emotion apparently.

This could conceivably be the same process as we saw with Wally West the elder at the very beginning of Rebirth, another consequence of that “stolen decade” business. We know from the experiences that Barry Allen and the original Titans had that memories can be restored from the old history even if it can be a bit oddly selective (none of the Titans remember Cyborg or Beast Boy being on the team back in the day) or perhaps indicates that this is not quite the pre-Flashpoint history that was changed.

The plot thickens and we're only halfway through this arc.
Posted by James Ashelford at 10:00