Finished Models #1 and #2: Makers of Things


August's big drive to finish models... begins. Cold over, I finally had an afternoon to knuckle down and get some painting done. The first two fruits of this labour and, unsurprisingly, the two models I had on the go that needed the least work but there are a few more models sitting in the “out” tray waiting for their bases to be sanded and painted but for the moment here's what we're starting with. 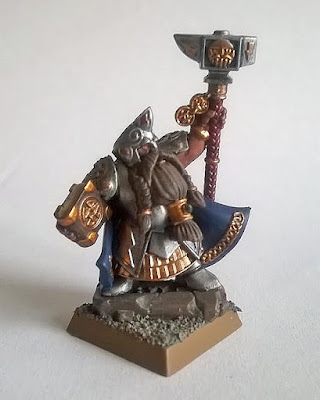 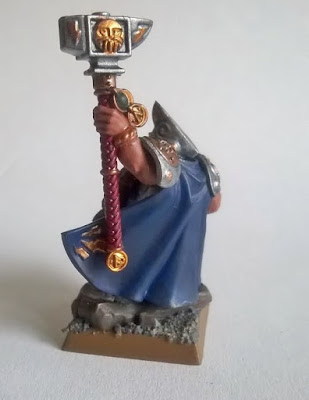 First off, the Dwarf Runesmith sporting a natty blue cape that will also be the unifying character for all my Karak Ziflin regiments. Mostly this guy was a test piece for all sorts of metallic methods I wanted to try out. I usually prefer natural tones because, frankly, you can be messy as you like with those and it actually enhances the effect. Metals, though, those you have to be more careful with.

Mostly it seems to have worked out, though I did just throw my hands up and yell “fuck it” over the filigree on the helmet after the seventh time trying to follow the line with the tiniest brush I have. So I'm just saying that's embossed into the metal, not a seperate material that I need to bother with, thank you.

On the self-critique side: the sand on the base was drybrushed with Karah Stone and it didn't come out as well as the large stone. Probably some more experimentation needed there. 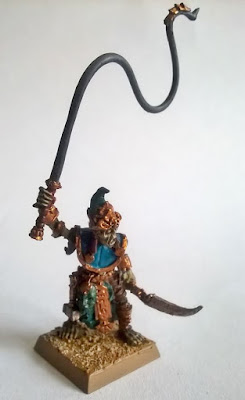 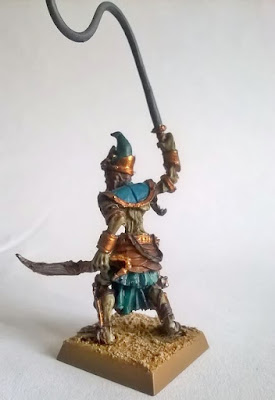 And, second, we have a Necrotect who, again, was painted mainly to test colours I wanted to apply to the rest of the army. Specifically, the green on the hat and the blue on the armour. My Tomb Kings are from Zandri and, according to one of the Nagash novels, the city's colours were sea greens.

The experiments came out okay though I admit I rushed to finish this one. Of all finecast models, this sculpt is one of the most abused with pebbling and rough edges everywhere. Still, this was the best casting I could find and I think he came out okay.

Now I need to get some sanding done to showcase some models with paintjobs more recent than six months ago.
Posted by James Ashelford at 10:00