My big push to finish old projects in August didn't do too badly: 36 models. Its not a bad total even if a lot of them just needed a few final details and basing to complete them but the motto around here is “Progress is progress”. I finished thirty-six models this month and that's a better total than any month this year.

And here they are... 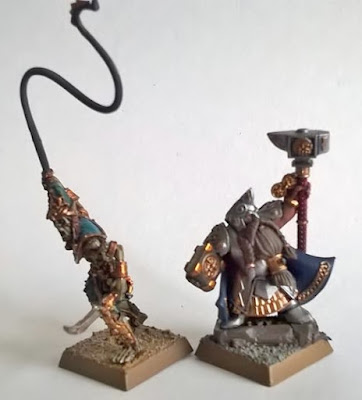 Already showcased earlier this month are the Dwarf Runesmith and Tomb Kings Necrotect. I'm proud of my work on both even if I'm not sure I could properly replicate the skin method on the Necrotect. Its a couple layers of Athonian Camoshade over Rakarth Flesh which sounds simple but when it comes to inking as a final layer there's a lot of atmospheric stuff that can influence the final effect and I laid that ink down on a particularly hot day. Still, worth trying again for my Liches and Royal characters. 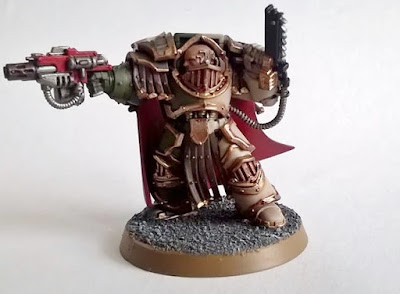 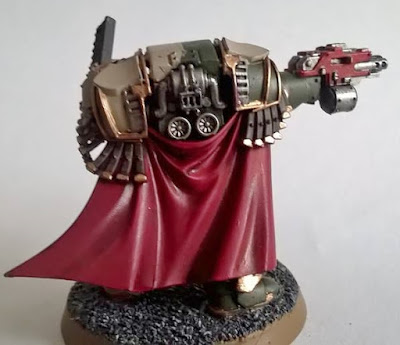 I finally picked out all the fiddly metallic detail on my Angels Of Redemption Captain (aka Legion Praetor in Cataphractii armour). I went for a copper effect rather than gold because a) I wanted to test out a bronze method (that I later decided not to use) for my Death Guard and, b) it felt a little more “antique” than glorious gold. I know Heresy stuff should look more glorious than “modern” 40k because it was the golden age but sometimes what feels right is more important than what is right.

Anyway, I loved painting this guy. If this runs to an army (maybe, maybe not) then I definitely want to use more of the antique armour marks. The particular colours of this halved scheme are quite forgiving and I love how the bronze contrasts with both armour colours. I also, hopefully visibly if my meagre photography skills holds out, managed some recess shading that came out well on the white and okay on the green. I am usually the “lay it on with a trowel” sort when it comes to shading, it has to be said. 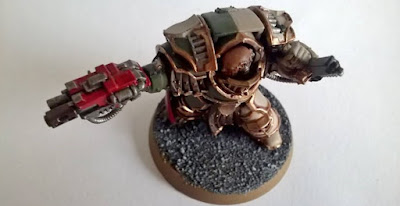 I also finally cracked grey basing! Turned out, thank you How To Paint Citadel Miniatures 2012, to ink it Nuln Oil to get a good contrast with the drybrush (which was invisible before). 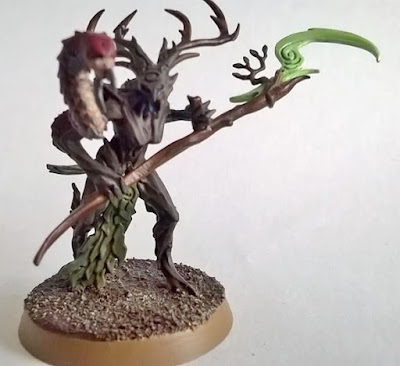 Next, we have a full unit of Dryads and my Branchwych finished up. Unfortunately, my camera seemed to take particular exception to focusing on these models, I think it might have something to do with the colours and how they contrasted with the background. Like the Runesmith and Necrotect these ladies just needed a few last details picked out and their bases done. So maybe this doesn't seem too big an achievement but it now means that more than half of my Sylvaneth 1000 points army is painted including my Warlord. I am literally nine models (my Treeman, Kurnoth Hunters and Tree-Revenants) away from actually completing all the models I have for this army. Also, its a big block of infantry finished for my Wood Elves. Double achievement! 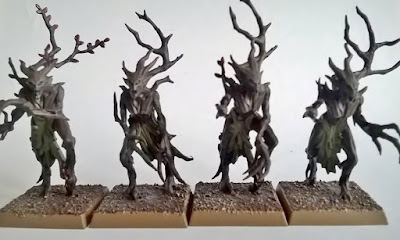 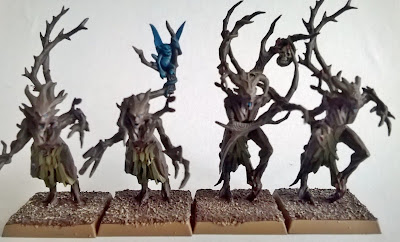 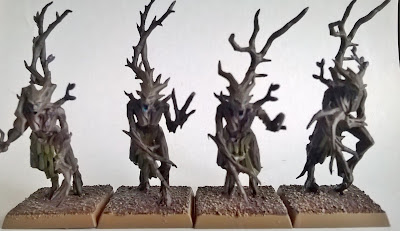 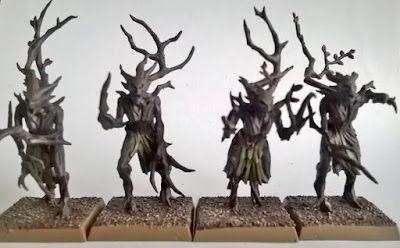 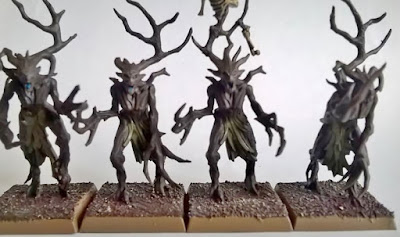 Shout out to my friend Matt for insisting I mix up the colours of leaves and such in this unit which kept me interested during the most boring phase of the unit. It also gives the unit, which is very brown, some nice visual interest when they're arranged in a block. 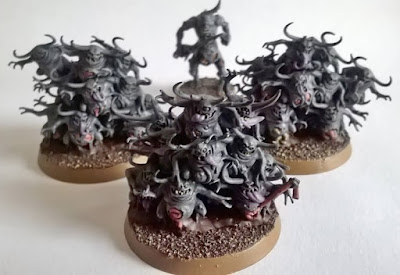 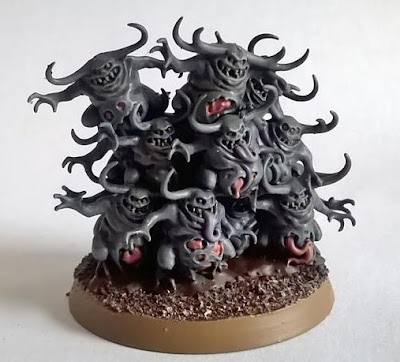 My colour test Plaguebearer (now complete) has been joined by a trio of Nurgling bases just to reassure me that the colour scheme works on more than one model. Lesson learnt, though: the horns on the Nurglings are very delicate and I snapped more than one during the drybrush layer. I'll be more careful next time but otherwise the method is quick, simple and looks like it'll look good on the whole Daemon contingent for my Death Guard. 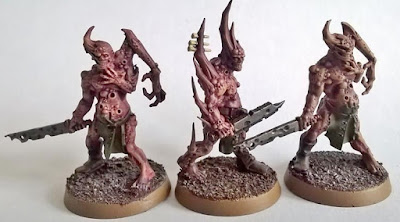 Also on the Death Guard front, the first six Poxwalkers finished. I'm painting them in small batches of a couple od designs at a time simply because there are so many differences between the sculpts that doing all twenty in one go would probably be more time-consuming and horribly dispiriting. They aren't the best paintjob I've ever managed but I suspect doing these guys “well” would not worth the time so I went simple with it. 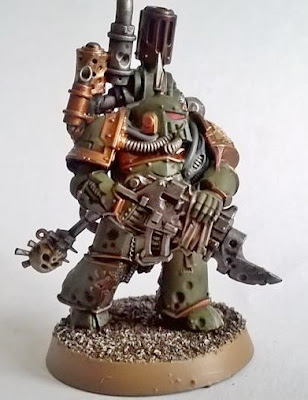 Speaking of things that are hard to paint in a batch, I've decided I have to do the metallics and finishing touches on the Dark Imperium Plague Marines singularly. This also meant I could experiment with the metallic colours on this miniature before committing to what I'd lay down on the rest. I like the finished effect... 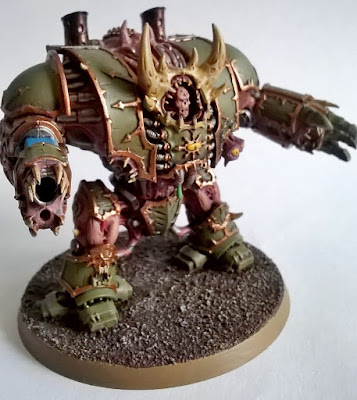 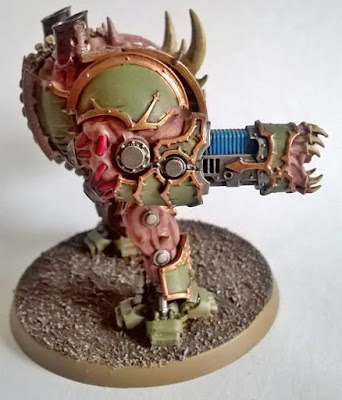 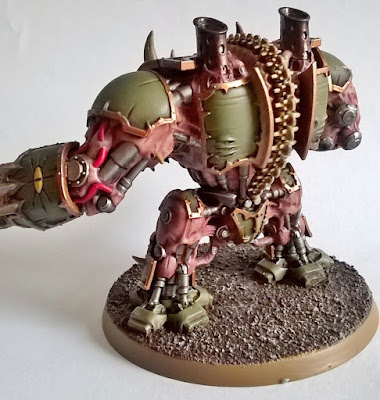 … which I then applied to my Helbrute to see how it came out on larger models. Again, it looks good. It takes ages because of how much armour trim there is on Chaos models but that would be true of literally any colour I used and I just feel lucky that I largely used pure Balthasar Gold on one layer to finish the models. I decided I just did not have the patience to bring it all up to Sycorax Bronze as I did with the Angels Of Redemption Captain.

(P.S. If you notice the Helbrute is missing components on its arms... it was an eBay job and came like that but I quite like it anyway.)

Anyway, now I have momentum behind me which wrestling commentary tells me is the all-important factor in future success so I feel confident going into next month and my Tale Of 1 Gamer project.
Posted by James Ashelford at 10:00