Age of Sigmar: let's get this one over with...

[Warning: strong language. I say “fuck” a few times. Also, this might be too much like the opinion of an actual, complex human being for a lot of people on the internet, so be warned.]

I really don't want to write this post but it seems inevitable. At some point its going to become clear that when I talk about my Warhammer projects that I'm talking about 8th edition rules and not Age Of Sigmar so let's get this over with.

Just to be clear: I have read the new rules, I have read the free downloads for my existing armies, I have played a game, I have watched several others being played. Can we please accept that now, finally, I have enough evidence to base an opinion on without being accused of “being a hater” or “fearing change”? Can we do this, please, internet? Because I am getting pretty fucking tired of me saying “This doesn't seem like a game I'll enjoy” being a signal for people who don't fucking know me to judge my emotional and mental state. I have actually had people imply I have a mental illness for not liking proposed changes to the rules, which is shitty to me and infinitely shittier on people with actual mental issues.

Oh, and the other perennial one: “throwing my toys out of the pram”? I ain't. I'm keeping the toys. I got my armies, I got my Army Books and I got my friends to play against, none of whom are bowled over by Age Of Sigmar. This is still a hobby I love and enjoy and it matters more to me to get pleasure out of what I do than to tailor how I spend my free time to please faceless dick-weasels on the internet.

And just to be clear, because there is another sort of gamer I can't stand and I don't want to be mistaken for them, either: I don't make any judgement on anyone who does enjoy The Age Of Sigmar, either as a rule set or a fictional setting. I am an actual adult and can in fact countenance someone else having fun with something I don't like. It is truly amazing how that works and I've encountered a lot of anonymous jerks who could stand to learn this. You know the ones: they wish Sisters Of Battle and Bretonnia would be done away with so they won't have to listen to those armies' fanbases “whining” about not having a current book or modern miniatures.

(For serious though, GW, where my Sisters book at? You've done Harlequins and two Mechanicus books. Get the fuck on with this.)

Nor do I want this new game to fail for Games Workshop. I don't have anything against the company or the design team as people. I don't want their business to fail and for them to lose their jobs because I don't like a product.

I'm also not taking my business elsewhere. So long as the models exist, and they don't seem to going anywhere just yet, and I can at least source square bases I'm happy to lay down the bones same place as ever. Time may come I'll have to turn to eBay and other sources, a day of wolves and shattered shields but it is not this day! 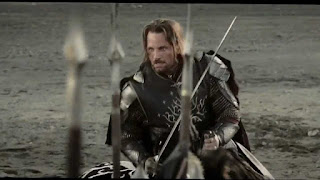 Okay, got carried away there.

I do have one Stormcast Eternal, though. It came free with this week's White Dwarf. To be perfectly honest, more important than any issues I have with the rules (and there are many) is the fact that this model just doesn't inspire me. It just looks like a Space Marine. I like Space Marines well enough but they have their place and that place is the grim darkness of the far future.

I don't know, maybe I can make a halfway decent Blood Angels Breacher Captain out of the thing. Feels wrong to throw it away.

The fact that the poster boys for this new edition do nothing for me even after reading their rules and background is what damns it for me. Gaming itself is the smallest part of this hobby for me. I play maybe two or three games a month and so the most time is spent building, painting and writing for my armies.

Everyone in my group writes, to a greater or lesser extent, and we've built up an extensive internal mythology to our games that none of us feels like abandoning or retconning to match this new setting.

Ultimately, I much prefer to be positive about my hobby. No, I don't like the Age Of Sigmar but it also represents a moment of complete artistic freedom. The Olde World is dead but in another time and another place where different heroes rose to its defence it can live on and that's the story my little group wants to tell. We can chart our own future now without even the slightest chance that some official publication will descend from on high and cause unwanted complications. Seriously, I had some High Elf character in our last campaign and when Khaine came out... ugh.

And I don't think that's unreasonable. It's my free time and enjoyment I'm talking about here. Yet people have insulted me over this, called me a hater and engaged in some seriously pathetic attempts at emotional manipulation to get me to like the things they like because that's reasonable to some people, I guess.

So, yeah, that's where my hobby's going for the time being. End rant. Peace out.
Posted by James Ashelford at 10:00

Absolutely spot on in every possible regard.

The 8th Army will march on to glory!

I admit I've always found WFB hard to get into mainly because (1) I don't like unit painting and (2) there seems to be too large a head count to easily get a taste before you decide to go whole hog. I've played AoS and enjoyed it but I don't really think is return to it again and again because it has no playable depth. That said my fiancé has expressed an interest and that can be no bad thing!

Only the people with poor culture (in general) play aos the game that cancelled Warhammer.
Hagen