Standard leak disclaimer: this could be fake. This could be meaningless. As real as the thing looks a fake like this is only a modicum of photoshop skill away. Also, sorry about the poor quality of the image, literally the best version I could find was on a Youtube video. 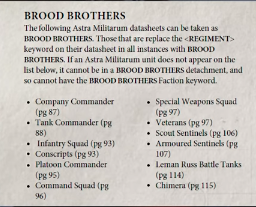 Here's the deal: instead of using allied detachments for some units and “Cult” versions of others from now on Genestealer Cults will just use selected datasheets from Codex: Astra Militarum and just replace the REGIMENT keyword with the BROOD BROTHERS keywork. For those using screen readers or unable to read the tiny, indistinct text the Astra Militarum units you can take are as follows:

On the one hand its not everything, which is effectively what you could take before now (or, rather, anything with the ASTRA MILITARUM keyword). Its also more than could be taken in a pure Genestealer Cults list.

Do I like it? Hell yes. There's Company Commanders, Platoon Commanders and Tank Commanders on that list which means Orders are now something Genestealer Cults can use. I am heartily looking forward to giving certain opponents a heavy dose of Front Rank, Fire! Back Rank, Fire! We now have access to Veteran Squads for some extra heavy fire power, as well.

Yes, there are gaps. I'm a little surprised Heavy Weapons Squads aren't on the list and I would have liked to see Hellhounds because I like Hellhounds. However, I get why even some of the more basic stuff had to be left out.

You can't take Regimental benefits because BROOD BROTHERS replaces rhe REGIMENT keyword, for instance, so as good as it is to have orders and Veterans and Special Weapons Squads you can't buff them further than their base statistics. Similarly, I get why the full spread of tanks and the more elite infantry are out of bounds: Astra Militarum needs to have things that make them superior to Genestealre Cults just as Genestealer Cults have things that make them superior to Astra Militarum.

And I like the humble Imperial Guard, I want them to keep having a point.

Am I saying people shouldn't be annoyed about this? Not entirely. The way this concept was introduced in the Index allowed you to use anything with the ASTRA MILITARUM keyword so I imagine a lot of players are looking at some units that are not quite game legal anymore. I know I have two Hellhounds I can't use for my Cults anymore and I'm just lucky that my Brood Brothers units also happen to be my Savlar Chem-Dogs army.

On its own, though, in the abstract I do like this rule and look forward to the tactical opportunities it opens up.
Posted by James Ashelford at 08:00