Some finished models and a goal for June


During my recent hiatus I had a chance to knuckle down and get some serious hobbying done. It was one of those moments when I really got into the zone and ended up actually getting a decent amount done. So much so that if I did individual pictures even for the units we'd be here for ages and I really want to just quickly showcase the miniatures and move on to my little hobby goal for the month. 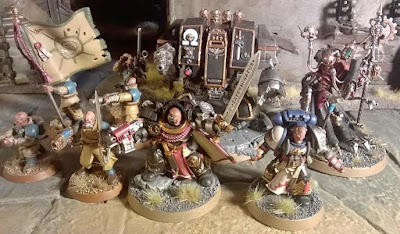 So, to start off with there is this veritable Imperial Soup of things for the Deathwatch and their associated allied detachments. Starting from the left side of the picture and moving anti-clockwise we have a Company Commander and Command Squad for the 322nd Savlar Chem Dogs made out of Cadians with the Genestealer Cults upgrade sprue (the foreheads cunningly filed down to remove the more overt signs of mutation). As it happens this army will be performing double duties as an allied detachment for my Genestealer Cults army down the line but that's neither here nor there. Next up we have two HQ choices for the Deathwatch itself: Captain Lucius Almas of the Angels Of Vengeance and Codicier Trayvon Delios of the Blood Ravens. On the far right we have Magos-Dominus Narses Hood (yes, not just a joke name, a pretentious joke name!) of Stygies VIII, overall commander of the Watch-Fortress' Mechanicus contingent. Finally, at the back we have the first of my Deathwatch Venerable Dreadnoughts, a charming fellow by the name of Antigeminus, late of the Omega Marines chapter.

As well as that little lot I also completed two six-man Kill-Teams. First up is Kill-Team Fury under Watch-Sergeant Varil Marak: 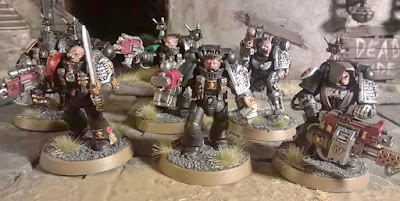 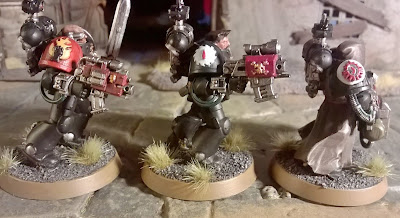 From left to right on the line-up we have Marines from the Fire Lords, Flesh Tearers, Consecrators, Brazen Minotaurs, Iron Hands and Subjugators chapters kitted out with long range firepower. By contrast, Kill-Team Mortis under Watch-Sergeant Zauriel (yes, I have a favourite Justice League run, why do you ask?) is geared more towards close range firepower and assault: 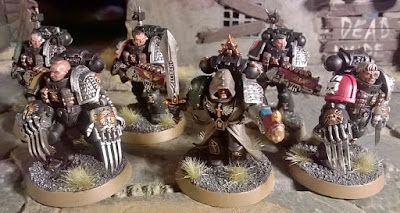 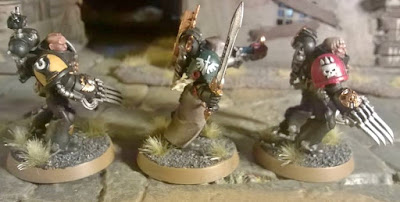 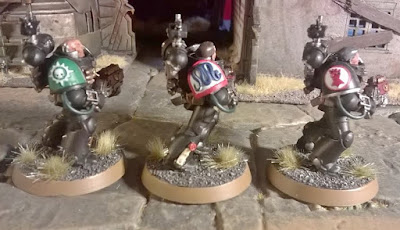 From left to right: Libators, Dark Angels, Carmine Blades, Sons of Medusa, Iron Snakes and Sons of Dorn (that last one modified slightly because there is no way I have the skill to freehand a circle, let alone a white circle).

Since the New Year I've been keeping a little hobby diary and it informs me that with these models I have painted 78 miniatures this year. My goal for the month is to bring this to a nice round hundred or (fingers crossed) beyond before we enter the second half of the year.

My challenge to myself from there is to see if I can do even better in the second half of the year. This is already the most productive my hobby has been in a long time and I've been carrying that energy over into other aspects of my life. Its genuinely been a positive experience.

So, twenty-two models to go. Sitting here looking at the rambling excesses of the work in progress shelf, which has seen some reinforcements as I look through boxes for things to finish, I see three Kataphron Destroyer;, that bloody Cryptek that I still haven't finished; three Raveners; ten Skitarii Vanguard; another Venerable Dreadnought; six Poxwalkers; ten Genestealer Cults Hybrid Neophytes as well as a Magos and a Primus. More than enough to be getting on with although looking at my hobby diary I notice just how few Fantasy miniatures I've painted this year (a mere six Skinks) and feel the need to redress the balance somewhat.

Anyway, twenty-two models minimum in the next four weeks. Doable, especially with so many half-complete ones to chip away at.

Then the real fun of exceeding the record begins...

Posted by James Ashelford at 07:00