(A quick preface before we begin: a big part of this review and a big USP for this series is that the new companion, Antonia Perkins, is trans. Your humble blogger here is cis and I just want to put that out there so readers know specifically where I'm coming from in reviewing this character and how she is written. Antonia identifies as female and she/her pronouns are used to describe her in the series' website copy. Any language mistakes contained in this post are most likely mine, are not mean as any form of disrespect and will be corrected accordingly when pointed out.)

SPOILERS: specific details of plot and how the story resolves are absent from this review but its impossible to discuss Antonia without some plot stuff, mainly things that happen in the first half of the episode.

Doctor Who: The Twelfth Doctor Adventures
episode one: The Lost Sailor 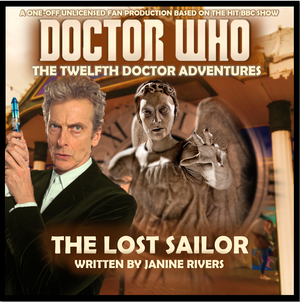 starring Paul Cabria as the Doctor
and Michelle Coats as Antonia

Its been a long time since I dipped my toe into the world of unofficial fan produced Doctor Who content (official fan produced content encompassing rather a lot including the TV series itself these days) and I'm old enough to remember the days of “not Doctor Who, honest guv” audio series like The Stranger, The Professor & Ace and The Wanderer. This series, being completely free and thus not for profit in any way, gets to call itself Doctor Who and use all the bells and whistles from the show it wants.

For one thing there's the Twelfth Doctor, played with uncanny precision of impersonation by Paul Cabria. I know its traditional in these circumstances to say you were fooled but I really do mean it is uncanny how similar the voice is. This isn't the audio equivalent of Richard Hurndall in a wig, this isn't even just a really good soundalike performance like Tim Treloar's Big Finish Third Doctor, this is a spot on impression of Capaldi's every verbal mannerism. The performance is helped by the writing, including the Doctor affirming respect for Antonia's gender identity in a speech very reminiscent of his assurance to Bill that she's safe in the TARDIS and always will be in The Pilot.

I guess now is about as good a time as any to address Antonia Perkins. How well or how sensitively her identity is handled is definitely better left to other writers with more stake in the issue than my cis ass but what I will say is that her treatment is interesting.

For one thing she does have to explain what being trans means to the Doctor which takes a moment but the Doctor does get it very quickly, reiterating that the Time Lords don't really have much of a concept of gender. On the other hand, by the time the subject comes up the pair are in 1985 and how this change will effect Antonia's personal safety flat out does not occur to the Doctor. Whilst I'm trying to comment as little as possible on Antonia's more trans-specific issues and experiences I have to say, as someone of an age with Antonia who resides elsewhere on the LGBTQ+ spectrum there is a certain very immediate terror to the idea of finding myself back in Thatcher's Britain. Its an idea that has enough broad resonance for people across the spectrum and even the densest of straight allies that it can have the maximum impact on the broadest cross section of the audience whilst still being very specifically tied to her particular identity.

Antonia's other unique selling point is that she's an aspiring writer lacking inspiration. Several early segments of the story have her narrating her work in progress and giving up in frustration. Again, this is a trait with broad appeal as I think everyone who has ever tried to write anything can relate. Other than that her main claim to fame amongst modern companions is that she has a decent relationship with both her parents which I'm glad of because, oh boy, could we do with the plague of bad parental figures Doctor Who has been dropping in since RTD not continuing with the first (albeit unofficial) trans companion. That isn't to say such a storyline would be without merit just that I think its something that can be done without especially so hot on the heals of Moira and Bill's relationship.

A queer character having two accepting parents is a subversion of expectations in itself and I'm glad to see it for once.

A large part of the early story, the getting to know you phase, is spent with the Doctor directing Antonia by phone as she searches for the TARDIS. The two talk about a lot of things, the Doctor slowly letting her in on just what a weird situation he's dragging her into and bonding over both shared and different experiences. One of the similar experiences they bond over, in fact, is the idea of choosing one's own name. As with many a modern companion introduction the story starts off with her and is moderated mainly from her point of view and, let's face it, that's a format that works.

I am absolutely on board with seeing where these two travel next.

Details
The series will be twelve episodes long, each running about the length of a typical modern TV episode and will be released weekly on Saturdays from the series' website here. Download is free and the series is not for profit and unaffiliated with the BBC.

Posted by James Ashelford at 07:30