This week past has been a bit odd, real life-wise, and so I've mainly just been concentrating on finishing up some things from the basing shelf. Thus, this week its just a showcase of finished models because its the end of Fractional Progress February.

I did get one game in, my first Fantasy game of the year. I dusted off my Lizardmen for a 2,000 points bout against Matt's High Elves. I got trashed. I'm not a man to blame the dice but the simple fact is the Lizardmen are designed to tear things apart in close combat and my charge rolls were just not ideal. Still, better luck next time.

On to more substantial progress:

Let's start with the smallest thing first because my camera just wouldn't focus on them (the odd blue shadow, however, is just going to be in all this week's pictures, sorry-pardon), a pair of Genestealer Cults Familiars from the Broodcoven box set. 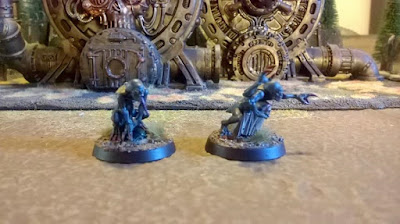 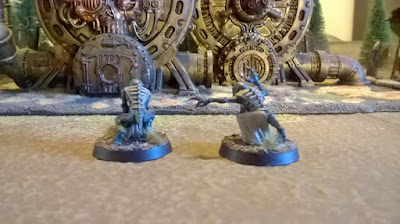 Still, at least the picture manages to capture the one effect on these I'm actually proud of (mostly they're just my standard Tyranids colour scheme but littler) and that's the murky white on the right-hand Familiar's loincloth achieved through drybrushing Pallid Wych Flesh into partially dried Agrax Earthshade over a Rakarth Flesh base. There's probably nowhere else to use this method in the entire army but it came out a treat.

I'm also trying something different for the Cults' bases. Right now they're an adjunct to my Tyranids but I want them to be an army of their own down the line. I'm thinking of a desert world theme and that's what I'm going for here. I think the base colour works but I'm not sure the Rhinox Hide rim works. Still, its the one part of a model that can always be easily repainted.

As to their larger cousins of Hive Fleet Jormungandr, first up we have a model it has taken my simply ages to finish, the Tervigon (again, apologies for that odd blue shadow that keeps cropping up, I can't work out where it came from): 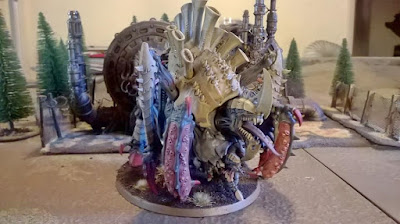 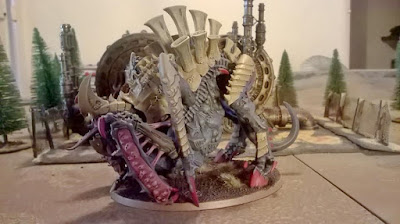 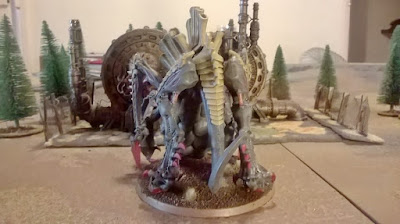 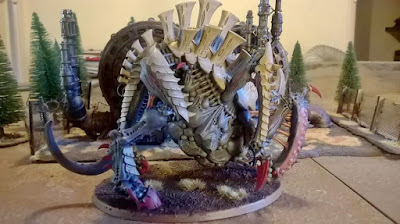 A good boy, a round boy, I'm sure you'll agree. Once again we return to my constant shilly-shallying over whether to undercoat these miniatures grey or bone because this was done with the Zandri Dust spray and the carapace has come out better here than on any other model. However, I had to spend multiple painting sessions getting a consistent grey on the skin. Worth it, though. 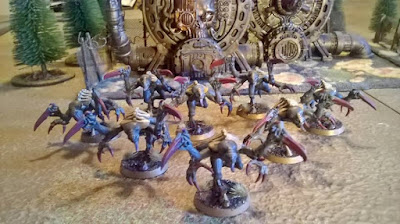 I also polished off a small unit of Genestealers with scything talons and rending claws. This is the first large unit I've finished for the Tyranids and I love how the colour scheme works. 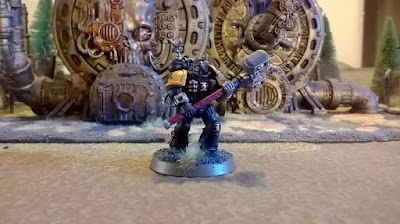 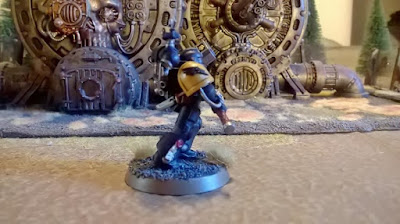 This was a pilot model and now I have the methods down I really want to step up production on the rest of the unit. The Stormcast Eternal-themed golds are really good, I was surprised to discover. They looked rather thin in the pot but they went on in one coat over the black. It was also nice to get a good, consistent yellow on the shoulder pad. Props once again Pop Goes The Monkey for his excellent 3D printed Deathwatch shoulder pads.

Finally, we have the cutest herald of plague and despair... 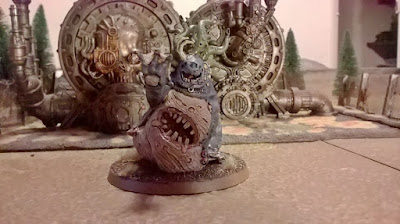 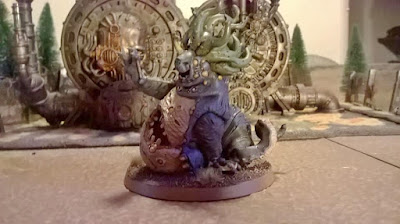 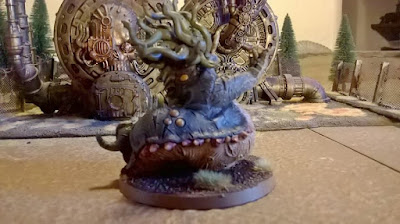 … the Beast Of Nurgle. I love its silly little expression, its little wave as if its just pleased to see the people its going to kill. This model was so much fun to paint and yet so easy. The different areas of colour are so well delineated. I also tried a new pale flesh method on the belly: Rakarth Flesh, Reikland Fleshshade and a Pallid Wych Flesh drybrush. I think I might try it on my Dark Elves down the line.

Tyranids are now 31 power strong, that's more than halfway to hitting the 50 power target. Obviously, the Kill-Marine doesn't constitute a complete unit and the Familiars aren't worth power levels so those projects are still at zero but that's still models finished so they count.
Posted by James Ashelford at 05:00