Against all expectation “Fractional Progress February” has been my most productive month of hobby in years. As I write this I have fourteen models completed all the way to the bases and eighteen others going through the slow, slow process of basing (it really is the dullest part of this hobby). That's not to mention all the models I've got something done on.

Its been productive, its been fun and its been really motivating.

So let's try move from Fractional Progress February to whatever theme I pick for March with a good, old-fashioned One Week Project. 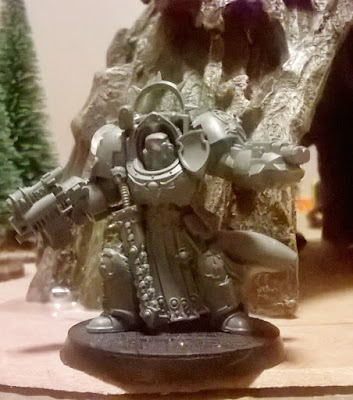 Yesterday, the local GW reopened after a refurbishment and so I picked up the special Space Marine Terminator Captain you can only get on such occasions (or by spending stupid amounts on eBay, no thanks). I also got a little stampy card that will eventually get me the even better looking Terminator Chaplain. Normally I wouldn't go for it but a) both the Captain and Chaplain look amazing and b) I'm getting to a stage with the Tyranids where I want to pick up a couple of the large monster kits so I'm spending the money anyway.

Regardless, the Terminator Captain. I've built him straight out of the clampack save for gluing a Pop Goes The Monkey “Maltese Cross” on the shoulder pad to make him a Black Templars Marshal. It doesn't quite fit, its sized for power armour, but paint should disguise the slight disjoint.

Black Templars are by my favourite variety of Space Marine (and I don't see someone this gloriously decorated as a Flesh Tearer, frankly). I've wanted to do this army for a while and this seems like the perfect opportunity.

On the skills development side of things this will be a good chance to practice highlighting black. I very rarely do full edge highlighting, I much prefer drybrush highlights, but Terminator armour offers a lot of easily accessible, long sharp edges to practice on.