Admittedly, these ten models have been waiting to have finishing touches applied to them since Christmas but they are done and they were finished this year (yesterday, in fact) so for the sake of my own morale and self-satisfaction I am counting them as the first finished models of the year and the first finished model of my 50/500 Challenge.

To start with, let's count the big fella as #1: a Hive Tyrant armed with monstrous scything talons and heavy venom cannon in (my interpretation of) Hive Fleet Jormungandr colours. 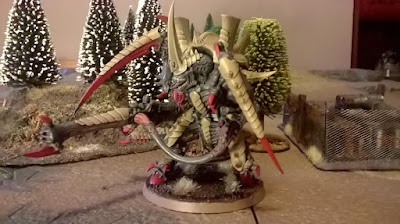 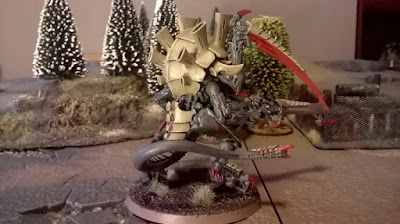 The colour scheme is based on the drawn art of Jormungandr from the Tyranids Codex and not the example model which looks completely different for some unknown reason. I picked it because it was simple and could mainly be achieved through drybrushing. Admittedly, my own laziness meant this took three months to paint but the actual method was quick enough and I've been able to effectively mass produce a good chunk of my army in the last two weeks. 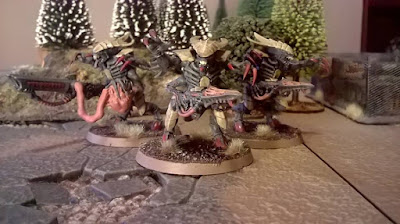 He is accompanied by a small Warrior brood armed with rending claws (the best can openers), devourers and a barbed strangler. 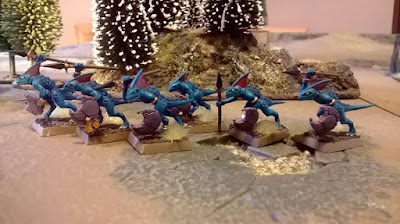 And, finally, we have a small Fantasy contingent as a rank of six Skinks armed with javelins and shields stalks past. These were an experiment for me. Until now I've been painting up my Lizardmen from a white base but I saw a Warhammer TV video that built them up from Macragge Blue which gave me a much better finish on the Sotek Green skin. I painted the shields Daemonette Hide for a lark and I think it really works as a contrast.

Now, as to keeping score: