A Tale of 1 Warden #5: Overdue Showcasin'


Yesterday, all of a surprise, the sun came out. My house is truly the worst place to take photographs. It is literally aligned against the passage of the sun so even the garden doesn't get good enough light half the time (nevermind British weather) and I cannot wait for that light tent to arrive.

Anyway, the first completed models for my Bretonnians: half a unit of Peasant Archers! The rest of the Battalion is in various states ranging from half-finished to barely started but I'm still very much enjoying the project. So, precious, precious photographic evidence: 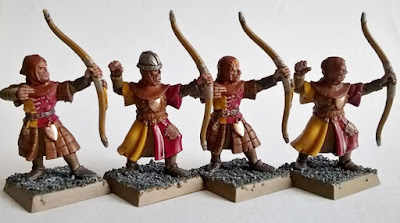 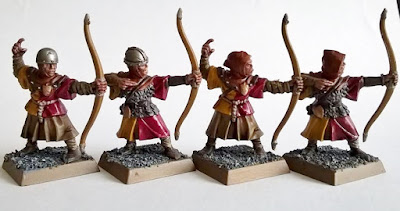 These were a lot of fun to paint and quite easy once I'd broken down in my head what was hard leather, what was cloth I wanted to be brown and what was cloth I wanted to paint in grubby heraldic colours. Originally the halved yellow and red was going to be the colours of a random knight champion but I like the contrast so much they're going to be the colours of my general's family (and of the Errants and Realm Knights of his household, just to make my life easier).

I was surprised by how well the yellow came out, actually, which I put down more to the Zandri Dust undercoat than any actual skill on my part. Between these and some Skinks I've been painting on the side using Macragge Blue undercoat I finally feel sold on using different coloured sprays.

As to the rest of the Battalion: the remaining Archer are about half done; the Men-At-Arms are just getting started with just some flesh tones filled; and, the Knights are taking a while to start because I'm painting each horse a different colour, partly as a colour test but mostly because since I'm painting them in uniform heraldry I want something to make the models looks more like individuals.

With eleven days of Month One to go I doubt I'll get everything all the way done but I'm making progress I'm more than happy with.
Posted by James Ashelford at 10:00