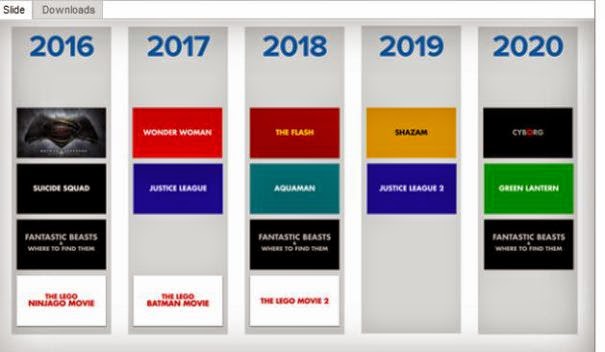 Okay, big thing that happened the other day not involving the clinically mental (then again...) is that Warner Bros. announced the basic shape of their film slate going forward to 2020. There's other stuff on there and they insist further solo Batman and Superman films (and Batman and Superman films?) will also be added to the docket in time but the big news is we finally have a roadmap for the DC Cinematic Universe.

So, what do we have?

Batman vs Superman: Dawn of Franchise we already knew about but the Suicide Squad movie totally crept up on me, don't know about anyone else. Its actually a pretty clever choice for universe-building purposes since a team of villains is by definition a team-up of characters from different franchises. This is especially good since DC has a horrible history of foregrounding bad guys in their films to the detriment of the heroes' development (i.e. every Batman movie since Burton) so sticking a bunch of them in a movie, developing them there and trusting the audience to remember them when, say, Ocean Master turns up in Aquaman might be an interesting solution to this problem.

After that there's Justice League, again as previously announced, but there in bright red is the big one: Wonder Woman and I only have this to say:

Please, DC, don't fuck this up. You are dangerously addicted to caution so please, for the love of God, unlearn the lessons of a lifetime, take a risk and make this movie as mad as it deserves to be! You are in the unique position of having the most established, most recognisable superheroine in existence so let that carry the concept and just make a good film. I do not want to be sitting through another Catwoman three years from now.

Moving on, The Flash and Aquaman. This Flash will not the be the TV Flash, not unnaturally as I imagine synching up the filming schedules for this and his two Justice League appearances would be a nightmare. Aquaman is Jason Momoa and I am very much looking forward to that.

Justice League 2... nothing to really say about that. Shazam I am excited about if for no other reason than Dwayne “The Rock” Johnson is confirmed as Black Adam (I imagine they'll call him Teth Adam for some reason). I just hope they remember to have a sense of humour about the property because I'd love to see a fun DC movie and I really, really don't think you can make a grim, dreary Billy Batson. Oh, wait, they did for the New 52 didn't they?

Then there's a Green Lantern film, most likely a reboot because nine years between films is a bit insurmountable even if Ryan Reynolds would still be interested at that stage. Someone somewhere (The Escapist's Moviebob, I think) floated the idea that the easiest way to distance a new Green Lantern from the failed one would be to go with John Stewart, both visually and in personality. That's pure speculation but it might be an interesting angle and the Justice League cartoon certainly means the character is known, perhaps the most recognisable successor hero in the Justice League stable.

And finally a Cyborg movie. Huh. I think this is going to be DC's Guardians of the Galaxy analogue, just with a little more caution but that's DC movies all over. It isn't that Cyborg is without cache, Teen Titans was a big cartoon and they appear to be using the New 52 make-up of the League with Cyborg taking J'onn's place so he'll be far from unknown to the audience. He's always been a “team” character, though. This isn't to say it can't work, it might even be liberating for the film makers to handle a character whose canon doesn't include any real limits on what he can do on his own. There are no Lois Lanes or Daily Planets here to be included as per spec, they can get really creative here. Part of me worries, though, that this might be on the slate just so all the individual Leaguers get “their” movie rather than as a risky yet creative opportunity.

Time will tell, it usually does.
Posted by James Ashelford at 05:00

I'm both optimistic, and terrified. As you said...please don't mess this up!

I'm just glad that another Green Lantern movie is coming out. I want Guy Gardner!

Well looking at this in 2020 at least 2 of those movies haven't happened and not heard of couple others coming out. Looks like JL really knocked back a lot of plans. Still a new batman filming in Scotland atm.