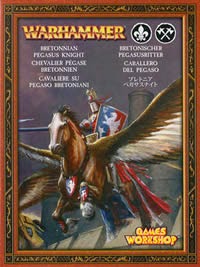 Okay, the revival of my Bretonnia army keeps getting delays due to lack of models but this idea won't leave me alone. You see, for a while my friend Matt and I have wondered how exactly Bretonnian naval warfare works when they don't have cannons. Logic dictates that they depend on boarding actions and ramming manoeuvres but a few nights ago something occurred to me:

What if Bretonnia has invented the aircraft carrier?

I just have this image of Bretonnian frigates acting as mobile bases for Pegasus Knights. The Bretonnian ships close with the enemy and whilst their peasant crews prepare for ramming speed and boarding the Pegasus Knights sally forth to draw fire and harry the enemy crews. Meanwhile Damsels using the Lore Of Life whip the sea up so as to batter the enemy ships and speed their own fleet to attack positions. Their Lore Of Beasts sisters use their own magic to augment the Pegasus Knights' attack run.

(Yes, I know Bretonnia is probably the most sexist and most superstitious human nation in Warhammer so you could argue that women wouldn't be allowed aboard. However, Damsels have long been established as beyond all social rules enforced on the general female population and quite a few enforced on the male population, too).


So now my Pegasus Knights have a theme: lots of trident and merlion heraldry to represent the coastal duchies. I wonder if I can pinch a trident head from Matt's Lothern Skycutter for the champion?
Posted by James Ashelford at 05:00

In Man O'War the ships actually used catapults rather than cannons ;)

I did not know that. That's a fantastic visual. I'm imagining trebuchets on turntables.