or, Paul Dini joins the resistance against the New 52 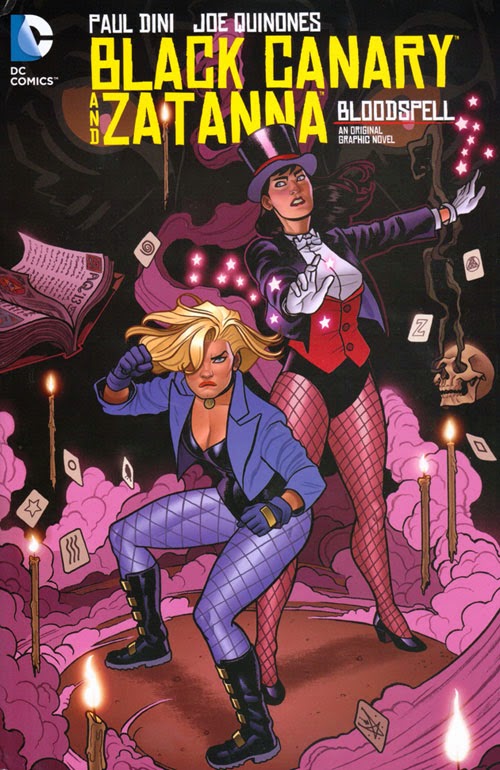 Paul Dini is certainly no stranger to the concept of reboots: he was one of the prime architects behind the DC Animated Universe of the 1990s/early-2000s and with his comics he tends towards an accessible style of done-in-ones that very consciously work on their own rather than as part of a larger continuity. He loves his mythos as much as the next comics pro but he's always been magnificently unconcerned with what such-and-such character did in so-and-so issue of whatever title a few years ago.

Part of this is how he came up in DC: Batman The Animated Series used broad archetypes of the established characters and worked them up from there, contradicting and adding to the original concept as they went and they were so good half of it was incorporated into the comics. Reboots, or at least self-contained storytelling, is Dini's established wheelhouse.

So you can imagine my slight surprise when Dini puts out a book that ignores the blank slate of the New 52.

Okay, brass tacks: Bloodspell opens with Zatanna and Black Canary's first meeting when Zee was a child and moves to the near-present with Dinah foiling a casino robbery, a case that turns mystical on her and so she teams up with Zatanna. This is all very much in Dini's style: a clean, crisp rendition of a classic team-up structure (Type A character on Type A case that becomes Type B case, enter Type B character) but spruced up a bit.

The sprucing up takes the form of delightful character set pieces including our heroes goofing off in a toy store and flashbacks to past meetings. One of the best scenes, for my money, is Zee's first day in the Justice League when she was “a geeky newbie sporting a terrified smile and the worst 'grown-up' hairdo I'd ever seen”, according to Black Canary. It's this scene more than any other that wears its pre-Flashpoint colours on its sleeve with cameos from J'onn, Ralph Dibny and a Z-list villain called the Key. We even get to see Dinah's terrible JLI-era costume in a later scene, plus she teams up with “her” Green Arrow for a few pages.

Not that it's pointless, the pre-Flashpoint setting lends the story emotional context. As far as I'm aware the New 52 versions of Dinah and Zee have never met whereas here their friendship is old enough and deep enough that they can go shopping together; talk to one another as equals; have funny stories about each other; and one can talk to the other whilst she's in the bath without it being weird.

This all could have been left out, though. Ultimately, Ollie doesn't need to be there: aside from a short scene of pillow talk his plot functions could be taken over by Batgirl (and even then I don't think there'd be many complaints...). Dini writes completely original flashbacks to his title characters' earlier meetings: modern Zee could have encountered the Birds Of Prey or consulted on a mystical-themed mission for Team 7. It doesn't even call back to Dini's previous run on Zatanna's solo series. This could be tweaked into a New 52 story with relative ease.

I wouldn't care as much, though, would I?

This continues an odd theme from DC's “Digital First” anthologies Legends Of The Dark Knight and Adventures Of Superman that whilst the mainstream of DC's output is focussed on building a new continuity in the Dini/Timm mould building from the archetypes up, re-visitations of their old continuity have emerged as a new form of fanservice.


Yes, this started off as a review but it rather got away from me. That's why I call these posts “Rambles” instead of reviews. You want the review part of the review then the bottom line is this: it's fun, it's frothy, it's self-contained with an efficiently written plot and well-honed characterisation plus a nice magical mystery woven in but any element of that description was pretty obvious from the sentence “Black Canary and Zatanna: Bloodspell by Paul Dini”.
Posted by James Ashelford at 06:00

Anything agressively pre-Flashpoint is okay by me!

I've been toying with the idea of getting this, and I think that you have made up my mind.

Oh, I'd definitely recommend it, to you especially.