Treading the Path Of Damnation once again 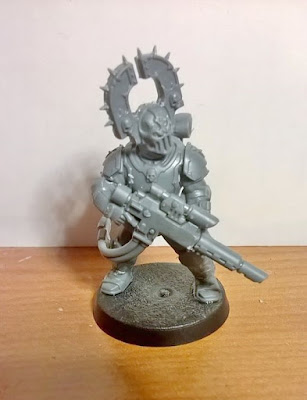 The other day I cobbled this fellow together. I found a bad of Blood Warrior heads in a box. I'd got them off eBay a while back because I kept seeing this same concept crop up on the internet.

You see, I've been tinkering with the idea of returning to my Lost And The Damned for a while. For those not familiar with this undeservingly niche army they are the mortal followers of Chaos. Traitor Guardsmen, essentially. They were a variant army list in 3rd edition's Codex: Eye of Terror and then, after an absence of some years during which that list became practically unusable, they returned as the Renegades & Heretics army list in Forge World's Siege of Vraks trilogy. 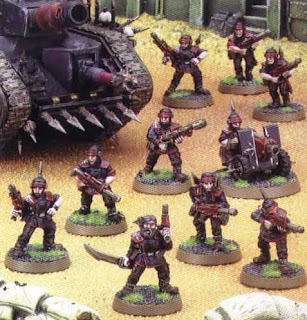 The list got a seventh edition makeover in Imperial Armour: War Machines of the Lost and the Damned before eighth edition came along and rendered that obsolete and the current list is included in Index Imperial Armour: Astra Militarum.

It has a lot of issues. In fairness, it is an Index list but since its going to be a while (possibly never) before a proper Codex version comes out the problems pile up. Whilst I like the idea of random Leadership, I don't like being charged the same power level as the Astra Militarum equivalent for random leadership and lower skill values. A bunch of units have just straight up evaporated.

So this time round I'm rocking it old school. My group is pretty chill about house rules so it was no stretch to just agree amongst ourselves that I could use Codex: Astra Militarum replacing all instances of the IMPERIUM keyword with CHAOS so I can use some Chaos Space Marines allies.

I have a few vague ideas of what I want to do with the army in terms of models. In terms of army list, not so much. It has been a long time since I played Guard, possibly not since 4th edition, as their own thing, at least. There's going to be a lot of trial and error and a lot of consulting with Tom, our resident footslogger Guard player. I am, I admit, much more interested in the sea of dudes with lasguns than the fascinating array of tanks. Don't get me wrong: tanks will feature in the army, there's no getting around that and I absolutely want to do something horrible and organic with the open crew compartment of the Basilisk.

So, the concepts so far, are to make Tempestus Scions pretty much straight out of thebox with head swaps and little bits of Chaos iconography to make them look more evil. They really lend themselves to simple kitbashing: they have tons of detail and that spiky trim on their armour will just look Chaotic simply through an appropriate paint job.

Veterans will be much the same in that they'll be Cadians with the aquilas filed off but with heads from a European company called Puppets Of War. Specifically, these ones... 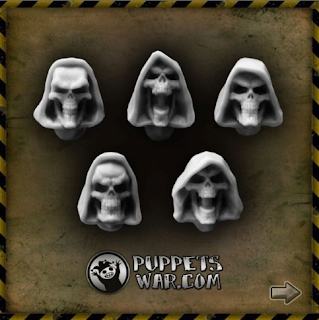 The colours of this army have always been black fatigues and white flak armour so skull masks suit the theme pretty well. This will represent the infantry that are more towards the inner circle of the cult, the ones with abilities and skills the Traitor General places some value on. 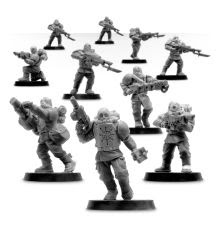 Finally, there will be the Infantry and Conscript Squads who will be represented using Cadians the Forge World Renegades upgrade sets of which I've acquired a few over the years. These will be the cannon fodder, the expendable scum the army has recruited on the way. I love the cobbled together look of these bodies but I've always had more of a professional military vibe to my Lost And The Damned, naturally considering most of my concept of the army comes from Dan Abnett's Blood Pact and Sons Of Sek.

And then, to one side of the army, are the Chaos Space Marines.

As I said, I want the Chaos Marines to be the smaller contingent of the army. Just a single character and a few units. If I have daemon engines they'll be painted to match the Traitor Guard. In fact, it might be a Spearhead Detachment so I can take a bunch of daemon engines with the minimum of power armour getting in the way. 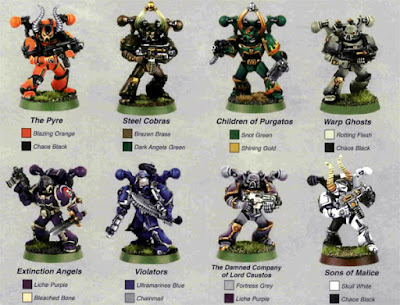 I also rather fancy avoiding the Chaos Legions and having my Chaos Marine allies being a little more... low rent. In fact, I'm tempted to go for one of these chapters who featured in Codex: Eye Of Terror (or possible the Chaos Marine codex, I just got this image from Google Image Search). Basically none of these chapters aside from the Warp Ghosts have any sort of background which suits me fine since they'll just be there to offer a little extra hitting power.

The Extinction Angels appeal as a design since the bone trim will tie in with the infantry whilst the purple armour will make them stand out against the rest of the army.

First up, though, is to finish building the first five Khornate Scions and paint them up as a test unit. Whilst they'll naturally have red armour plate they will have black fatigues and bone trim so I can practice the methods I'll be applying to most of the rest of the army.
Posted by James Ashelford at 06:00