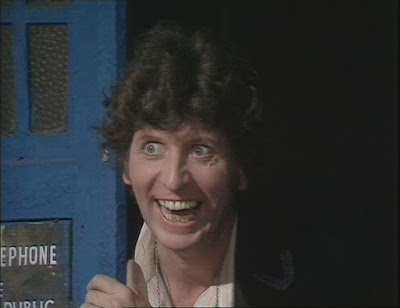 Doctor Who's twelfth season is a funny one. Now, I get why it was chosen to be the first bluray season box set, the logic is sound: its Tom Baker, its his first season, it has a bunch of classic monsters in it including an absolutely iconic Dalek story. Its a good choice.

Its just an odd season.

To set out my stall a little: I'm of a generation that I got into Doctor Who after it was cancelled the but also before it came back as a magnificently successful revival. When I entered this fandom, and for a long time afterwards, Doctor Who was not a TV show. It was a series of video releases beholden to no logic of season or theme, released pretty much at random or when decent film prints became available for restoration. As such I've not really ever watched the classic series in any sort of order. I've tried once or twice to do one of those “everything in order” marathons but I don't have the patience. My best attempt got me as far as... The Keys of Marinus, I think? Maybe The Sensorites.

A season at a time, though? I think I can do that.

So here we are on bluray with Season Twelve, the first of Tom Baker's seven year run in the title role. Now, I've seen all these stories before, many times in the case of Ark In Space, but I've never watched them as a body of work.

So what are my impressions of the season before I watch it in order?

The reason is simple: Season Twelve effectively has two creative teams. The production itself was largely handled by the new production team of Philip Hinchcliffe and Robert Holmes but the scripts were commissioned by outgoing producer/script editor team of Barry Letts and Terrance Dicks. The first story was even made by the old production team because the series had been banking a story between seasons for the last couple of years.

Bizarre to think in these days of obsessive brand management that a big relaunch with a new Doctor and a new creative team would wait four weeks for the old creative team to finish out their contracts but there you go. It might be the most extreme example of the problem but the whole structure of the season is like that: Letts and Dicks ideas, Hinchcliffe and Holmes execution. Three of the five stories in this season use old monsters, a well Hinchcliffe and Holmes would studiously avoid for the remaining two years they stayed on the programme. The nearest they come under their own steam is using the Master once and even then they basically create a new villain and slap a familiar name on him.

So Season Twelve basically represents the transition from the UNIT years to the body horror theme of Hinchcliffe and Holmes. In my memory its rough.

It has its highlights. If there's a Doctor Who story I've watched more than The Ark In Space... well, its probably City of Death but Ark is still one of my favourite go to stories when I just want a solid story to watch. I'm not one hundred percent convinced of the masterpiece status Genesis of the Daleks has in fandom but it is a really good story (and I am very interested in seeing what the cut down “TV movie” edit included on the bluray does for its pacing). Robot, whilst being very different from what follows, is a solid effort simply because its written by Terrance Dicks and able performances from the old UNIT crew to smooth the transition as Baker finds his feet.

That's the good. Then there are the problem children of the transition, the ones popular legend says Robert Holmes could not save: The Sontaran Experiment and Revenge of the Cybermen. Both stories are production experiments as Hinchcliffe and Holmes tried to make production cheaper so they could justify dropping six-parters. The Sontaran Experiment was a two-parter filmed entirely on location whilst Revenge was filmed on the same sets as The Ark In Space. The problem with production experiments like that they need great writers to make them work in the very tight parameters they're given. Here we have Bob Baker and Dave Martin, the crazy ideas men of the Pertwee era asked to make a tightly plotted two-parter that can only use physical effects, and, Gerry Davis in his last (and only solo) contribution to the series and, boy, you can see why.

And then there's Harry Sullivan.

I admit to being a little split on Harry Sullivan. I kind of like the character. He's a comedy idiot but Ian Marter always plays the part with conviction. Yes, even the giant clam incident. Standing next to the all-time dream team of Tom Baker and Lis Sladen, however, he can look superfluous to requirements. I wonder how he'll look to me when I see the lion's share of his stories in order.