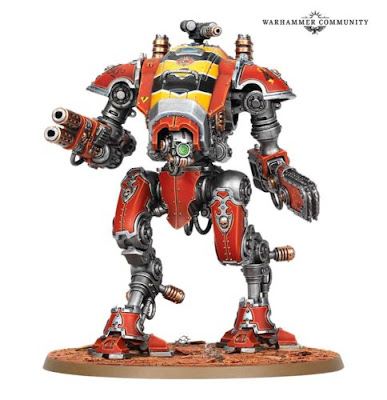 I have to admit, this little fellow is making me consider an Adeptus Mechanicus army again. Now, I love Imperial Knights (and Empire Knights and Bretonnian Knights and Cold One Knights and all the other knights) but I have to admit that the Armiger is a lot closer to what I imagined when I read Graham McNeill's Mechanicum nearly a decade ago.

That's not a criticism of McNeill (probably the world's foremost Knight fan) but just a reflection of the fact back then Knights were an all-but-forgotten artifact of deep lore and not a thing you could buy in store. So you had Knights as something an unaugmented human woman could keep pace with and have a chat with the pilot at the same time.

(If I'm mis-remembering that scene, my apologies, it has been a few years).

According to the Warhammer Community post about them you can take them in squadrons, the first Lord Of War choice that can be taken like that. They're built for hunting, basically, softening up enemy vehicles and engines before the bigger Knights come in to finish them off.

Imperial Knights now have their own version of Mounted Yeomen, which I rather like. I also like that the melta weapon is actually called a thermal spear. It looks fast, too, with the back-jointed legs.

I do hope it has an alternative head. I like the one in the example but it matches the Mechanicus head the main knight has and I'd like one to match the “noble” head which I prefer (even though I am considering these as part of a Mechanicus force).
Posted by James Ashelford at 05:00