Forgebane pre-orders are this weekend and I really want the little Knights. If I have my maths right, even before you count the new stuff its still a £20 discount. So, here's the question: what to do with it all.

Now, I do have some Mechanicus stuff I impulse bought when it all first came out. Typically for me I didn't get much done on them. I painted a couple of Vanguard with blue robes because I vaguely liked the idea of representing the Ultramarian forge world of Konor. I've gone off that idea since mainly because I just did not like how those models looked in blue. Its a bad colour for them, it makes them look too small.

I don't have a Necron army but I've often thought having one might be cool. I could always just sell the Necron stuff on eBay though I doubt I'd get a good price on any of it because you know that so many people will just be buying this stuff for the Armigers and flipping the rest of the stuff for a profit thus no profit for anyone because market saturation.

Not that I have any grounds for complaint given the number of dirt cheap Tyranid Gargoyles I've snagged because no one wanted them from their Start Collectings. I've never figured out why, I adore Gargoyles.

Anyway, Adeptus Mechanicus and Necrons. What would I do with them?

The Stygies VIII colour has some appeal, I admit, but I have so many black armies that I think the black robes might bore me out of the army. Most of the other sub-factions are in various combinations of black, grey and red which is a bit too standard for me. Then I saw that the new Codex has a whole double page spread of new forge world colour schemes including...

… Voss Prime. Skitarii who look like Swiss Guards. You don't tend to associate the Mechanicus with bright colours but the key art from the Codex here looks so good. It will also hopefully assuage my occasional desire for a Howling Griffons army. Voss Prime is apparently known as “The Right Hand Of Mars” thus giving me a valid background reason for using the Martian Forge World Dogma: Glory To The Omnissiah which allows you to randomly generate two Canticles of the Omnissiah each turn.

Voss is also the closest forge world to Armageddon which would be a nice excuse for them to be tooling around with my Savlar Chem-Dogs until I have a proper army's worth of either.

There is comedy Necron background. At the very least there is Necron background with a funny idea at the heart of it. You see, there was this exiled Necron noble called Thaszar. He was exiled and placed into hibernation on his Tomb Ship on what would become an Imperial world. Millions upon millions of years later the master program of the Sarnekh Dynasty crownworld sends out a recall order to his Tomb Ship and he wakes up, destroys the Imperial capital as he blasts his ship free of the planet's crust and returns to the world of his birth.

Except the master program for some reason issued his recall but didn't wake anyone up.

So our boy Thaszar hacks the master program and convinces it he's the phaeron of the dynasty and has that concept hard coded into every single Necron on the Sarnekh crownworld Zapennec. And he isn't happy to just be king, oh no, he decides he's going to be a pirate king.

I will restrain myself from converting an Overlord to have a tricorn hat but I intend to go absolutely overboard with the colour scheme. Lots of regal blue with gold accents, maybe even some white panels around chest and legs to make them look like Napoleonic naval officers. Maybe even work out a rank system represented by how much gold is on the body.

I might have to think heavily about how of even if I can incorporate the Triarch units. On the one hand they're not something Thraszar would have been able to reprogram as they wouldn't have been hibernating on Zapennec (I don't think) but on the other they seem so intent on re-establishing the Necrontyr empires that they might just accept that this guy exists and has a huge space navy so they'll just try to enforce the rules on him in the hopes that he'll at least be useful.

I'll have to do a lot more background reading before I decide whether that's a viable storyline or not.

One thing I've learnt the last couple of months in my little hobby renaissance is the value of a good test model. I tend to go for an ordinary trooper of some variety but since I have a Magos Dominus to hand from aforementioned impulse purchases I might as well go all out and start with generals. 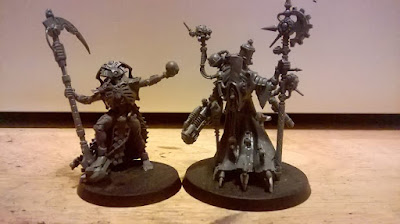 So, in the red corner we have the Adeotus Mechanicus Magos Dominus with his Pope hat (I love the Pope hat) who is going to get the halved red and yellow Voss Prime colour scheme. In the green corner we have the Necron Overlord who will be getting a suitably naval ceramic design in various blocks of white and regal blue. I can already see it in my head: regal blue on the limbs and the side of the torso, bone white on the ribcage and certain elements of the legs, gold helmet and lower arms. I'll probably keep the resurrection orb and scythe in the traditional green to have some of the more common Necron visual signifiers.

To the painting table...

Posted by James Ashelford at 05:00