Saturday Teatime 1.4: The Edge of Destruction

(Yes, I am calling this The Edge Of Destruction like the VHS, the DVD, the Doctor Who Magazine polls and, in fairness, the title card of the first episode. Yes, when I was growing up and fans were brought up proper this was called Inside The Spaceship but general social pressure seems to have out-voted me on that one.) 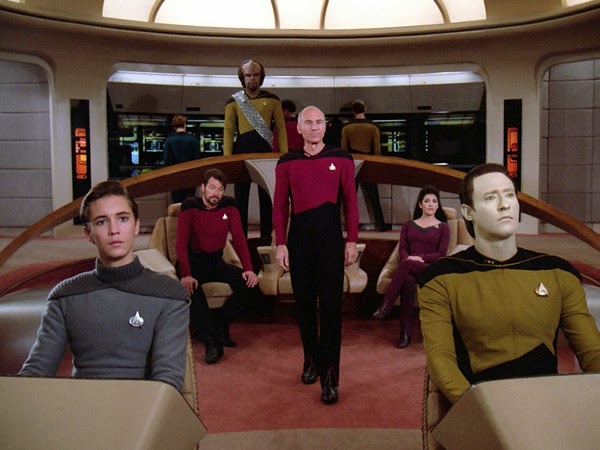 An interesting thing about Doctor Who fandom is that we're as obsessed with how the series was made as we are about what makes it on screen. Doctor Who Magazine's news pages regularly carry whole-page articles about what order the next series is going to be filmed in. I subscribed to Star Trek Magazine for a while in the late 90s and they never went that far: they'd mention upcoming guest stars or the director if it was a cast member but things like production order never entered into it except when they needed to explain why actors were remembering making episodes in the wrong order.

Production details are a big thing to Doctor Who fans, though, so I know that this two-parter has the production code Serial C; that it ends the thirteen episode run the BBC ordered before renewing the series for a full season; and that it is set entirely aboard the TARDIS and features only the four regular cast members because the series ran out of money.

Yes, this was a story made entirely to balance the books. Sets are expensive and hiring guest actors is time-consuming. In Star Trek this problem is easily solved: those series take place on starships or space stations with lots of standing sets and a cast of nine or ten characters. Doctor Who, by contrast, has a single standing set (the TARDIS console room) and a far smaller recurring cast. Even when its cast is at its largest in Season Eight there'll only be six regulars and one of those is the villain. Here we have four people, the console room set, the food machine room built for the first episode of The Daleks and whatever other space can be made by moving the walls around. On the plus side we have story editor David Whitaker on writing duties, a fact that will come to mean wonderful things in the future even if not just yet.

So it is with some reluctance I admit the opening of the story does not grab me, in fact I don't like it at all. I've only watched this story once and these opening scenes are the reason why. At the end of The Daleks the TARDIS took off and everyone was knocked unconscious by an unexplained explosion. This story is about working out what's wrong with the TARDIS, sorting out the tensions between the four characters and delivering two science lessons of varying quality but first we get this horrible bit of time-consuming faffing about.

Okay, so everyone wakes up and all of them are acting odd: Barbara and Ian don't recognise the Doctor or the TARDIS; the Doctor is half-conscious and babbling; and Susan moves slowly and cautiously, reacting to everything on a time delay. The director is obviously going for weird and alienating but the simple fact is it comes across as nothing more than actors missing their cues and forgetting their lines. Considering we're talking about an era when scenes did go out where actors miss their cues and forget their lines this is deeply unfortunate. William Russell suffers the most. I don't think Russell is a bad actor but Ian is a very narrowly-written part who tends to switch between anger, amusement, bewilderment and very little else. Divorcing Ian even from that limited range and having him react to everything as if he has a concussion is not a recipe for success.
Then Susan threatens Ian with a pair of long-bladed scissors and proceeds to stab up a mattress whilst screaming hysterically. Not unnaturally, and here we return to the Doctor Who fan's deep knowledge of production history, this led to the series' first serious viewer complaints about the series. The cavemen and Daleks might have been a bit too scary for some children but at least they weren't doing anything that could be imitated by kids with lethal results. This is a character going nuts with a household implement you could actually kill someone with. These days the BBC has rules about “imitable violence and peril” so that, for instance, when all the A-positives walk up on the roofs in The Christmas Invasion you won't see even a single child up there.

These opening scenes dominate my memory of my first viewing and I was glad to see that everyone aside from Susan settles down by the end of episode 1 and we get onto the meat of the story: the tensions between the crew.
Something is clearly wrong with the TARDIS, a fact communicated by odd incidents like the doors opening on their own, Susan fainting when she touches the console, and later on when the clock and everyone's watches begin to melt. Everything weird in this story is put down to the fault, which doesn't quite make sense. The idea, put forward by Barbara in an interpretation of events even Jacqueline Hill can't quite sell, is that the TARDIS is trying to communicate with its occupants that they're in danger. From this we get the origin of the idea that the TARDIS is sentient, or at least self-aware, though this theory suffers from a few holes. The first hole is that the Ship has chosen to communicate in the most obtuse, obscure manner possible considering that she knows her existence is under threat. The other is that at no point is the Great Mattress Scissor Massacre explained, Susan simply snaps out of her paranoia in time for the climax.

Here we come to the saving grace of the story because once you're past the jarring early scenes and the explanations that make no sense the four regulars put in strong performances. The big one is Barbara yelling at the Doctor when he starts to accuse her and Ian of sabotage. She points out, stridently, that the Doctor would have been killed several times over if not for the two of them pulling his fat out of the fryer. Its powerful, its delivered with conviction and by the end of the story the Doctor is far more respectful of her. They have a lovely scene just before the end that ends with the Doctor offering her his arm. There's a respect there that will underlie the whole of their relationship from now on.

There are similarly powerful moments with Ian, including a moment where he graciously steps in and accepts the Doctor's contrition without forcing him to actually apologise. The two men are coming to an equality in their relationship which is just as well since the continuing softening of Hartnell's performance, especially in that last scene with Barbara, means he'll be ready to share Ian's leading man position just as soon as he's done becoming a hero. We'll get there but the hostility hasn't died completely yet. He's willing to throw Ian and Barbara out of the TARDIS when he thinks they're against him no matter where they've landed and in spite of Susan's objections.

Oh, yes, Susan, who doesn't get an apology of any kind. During the final crisis of the story the Doctor lies to Susan and Barbara, telling them they have more time than they actually do before the Ship is destroyed. Afterwards he doesn't apologise for this but he does concede to Barbara that she was right in her interpretation of events and from that moment things between the Doctor and Barbara settle down. He lied to Susan, too, though but even after everything the story puts Susan through she gets no apologies, no words of comfort, she's just expected to bounce back and forget that her grandfather came very, very close to abandoning and possibly murdering her teachers. Susan actually goes through more than most of the others in this story yet it isn't judged worthy of comment at the end.

An apology would certainly have been a better use of screen time between the Doctor and Susan than having him explain, for the second time in five minutes, how the whole problem with the TARDIS was down to a stuck switch.

Ah, yes, the Fast Return Switch, clearly labelled on the TARDIS console in felt tip. What stands out about this isn't the sheer low-tech degree of mechanical fault because complex mechanisms are broken by small faults all the time. No, what stands out is how boring the explanation is with the Doctor whipping out a pencil torch and using the on-button to demonstrate to Susan (who is, lest we forget, an alien genius from a society that can build time machines) how a switch works when it was entirely obvious what had happened from the dialogue the Doctor and Ian shared when they discovered the fault.

Worse, this scene follows Hartnell delivering a great speech to camera explaining how solar systems are formed through the accretion of matter which actually comes out quite poetic. We get a fun but largely useless science lesson (at least at the schoolboy level the series is currently pitching for) followed by a practical but unbelievably boring one. The educational aspect of the series isn't going to last long and this, even more than the condensation bit in the next serial, shows us exactly why.

Next Episode: Marco Polo
Posted by James Ashelford at 06:00