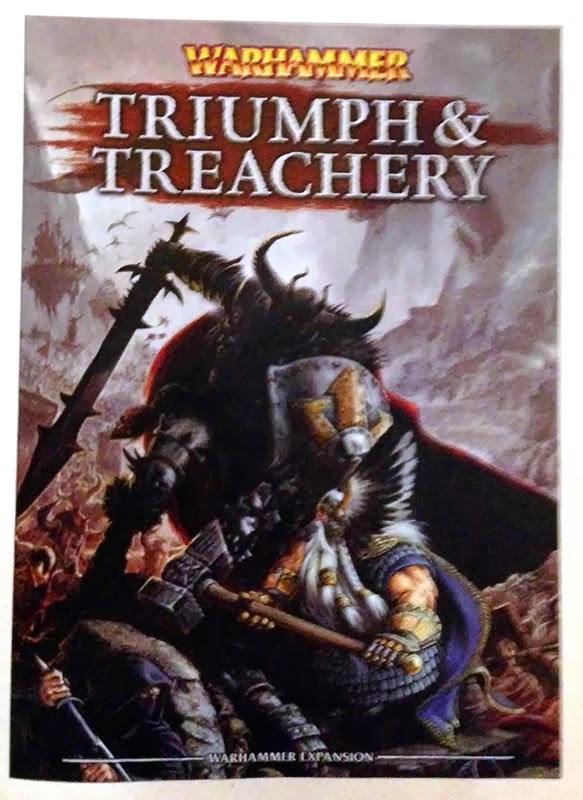 Yesterday I had my first game of Triumph & Treachery, the Warhammer supplement for more than two players. It was a four-player game to mark a significant moment of the campaign. We were split into two rough teams: Matt and Tom allied their Empire armies (one of which, Tom's, is a bit rogue) whilst my Vampire Counts teamed up with Iain's Warriors Of Chaos (who had previously captured my General and ransomed her back in exchange for support in this battle).

It was our first game under the system so let's skip over some of the obvious ones: things took twice as long as they should have (the game lasted four game turns and nearly seven hours) and we were constantly forgetting to play our Treachery cards at the right moment.

We made one other huge mistake in that the Empire players took one long edge of the table and the Friendly Alliance of Hugs and Niceness (Tom's suggested name for my team) took the other.

Thus things greatly descended into two normal games taking place in parallel. Over the course of the later turns Tom and Iain came to fight other opponents but Matt and I found ourselves largely restricted to the player directly opposite us. If we'd chosen to deploy allied armies in opposite corners I think we'd all have been faced with harder, more interesting decisions about who to declare our enemy player in our turns.

All that aside I like the system. The mercenaries rules worked well with only 200 points of extra troops per 1000 points of main army meaning they added a little flavour (Dwarfs for the two Empire players, Skaven for Iain and High Elves for me, which is a long story we'll get into another day) without making matters confusing, visually or mechanically.

The matter of nominating a single player to be your enemy in each phase is also a good system. Things get a bit abstract here and there (a cannon ball can't harm a neutral player, for instance) but it's better to have a rule affect the game under all circumstances rather than having a half dozen exceptions cluttering it up.

Treachery cards are fun, too. I had two great ones I got to play. The first was a card that simply stops a war machine from firing when your opponent declares he's targeting you. The other, and the effect of this was amazing, is a card that you play after another player's Wizard has failed to cast a spell. Play the card and that spell goes off with irresistible force (so cannot be stopped) but this also forces a miscast.

I played the card when my “ally” Iain's Shadow Sorcerer Sith'Kin failed to cast a spell at Tom's army. It went off, which he wanted it to, and thanked me. Then I pointed at the condition, Iain rolled on the miscast table and his Sorcerer promptly rolled Dimensional Cascade and was swallowed by the Warp.

All of which serves that Sorcerer right for compelling my Master Necromancer Berenice Von Gallenberg to provide troops for him by attaching a mutant strangulation beast to her neck.

Would I play again? Yes. But I'd have to say that unless experience makes the game much, much quicker I'd restrict it to 1000 points a player (we played 2000 with 400 of mercenaries each) and either not have alliances or not deploy as we did along parallel sides.


All in all, though, an excellent system.
Posted by James Ashelford at 15:47