Having dealt with some pretty heavy personal stuff over the last couple of weeks its time to get back on the horse and have some damn fun. That is to say, getting back to some hobby and making a tentative stab at White Dwarf's Warhammer Resolution Challenge.

To this end, this week I want to complete the model I have chosen as January's Monthly Challenge, the newly released Dark Angels Master Lazarus... 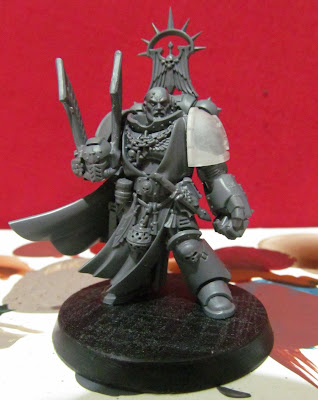 … with a couple of modifications. To wit: my absolute favourite Space Marine head (the Sternguard Marine who looks like Charles Dance) and a 3D printed Angels of Defiance shoulder pad from Shapeways. I have an odd things about Primaris Marines in that I kind of hate how they look bolted in to otherwise old-style Space Marines but I kind of like them as their own thing. Thus, grabbing some shoulder pads off Shapeways to do an Ultima Founding chapter. 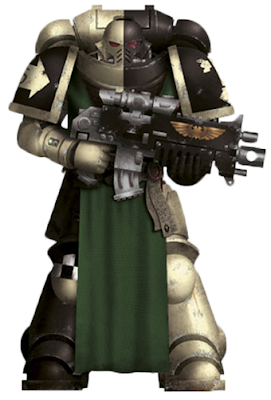 The Angels of Defiance also have a quartered colour scheme (bone and black) which is something I've wanted to try out for years. I even started a Novamarines army many, many years ago but didn't have the patience or skill to pull it off, especially the white the colour scheme called for. The contrast between the bone and the black should be a lot more forgiving, though, as I know I can paint those pretty well.

Now, to actually get this done.
Posted by James Ashelford at 06:00