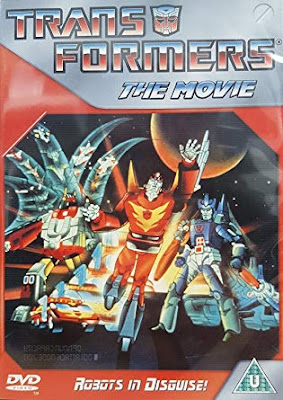 Okay, I know the main cast of The Transformers: The Movie aren't the Wreckers and can't be the Wreckers because the comic wouldn't come up with them until months after the movie and television canon wouldn't acknowledge the name until... Transformers Prime, I think.

Ultra Magnus and Springer are basically in charge for most of the movie. Kup, Arcee, Perceptor and Hot Rod were all Wreckers in the IDW-verse at various points (I think). I think that just leaves Blaster and Blur as the only real non-Wreckers in the bunch. Admittedly, this is because endless comicbook and cartoon continuities have made a lot of Transformers characters into Wreckers.

So, yeah, this is why in my head the film is pretty much The Wreckers: The Movie.

(Also, I never noticed before Superion right there on the cover of the DVD despite his complete non-appearance in the film. Bad form, Hasbro.)
Posted by James Ashelford at 06:00

Featured movie programs are aggregated at showbox for chrome. A system that provides high quality movies brought by showboxvpn.