The men of the Empire march to war 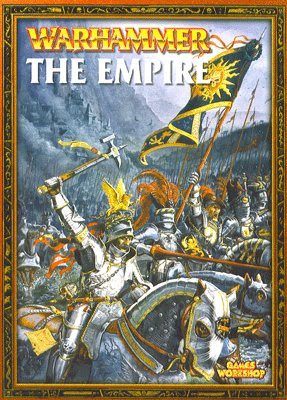 Every year my little gaming group gets together for a big group game. Back at uni it was the last week before the summer holidays, these days it's the end of November before our flats are too full of Christmas tree for anyone to set up a gaming table.

The game we'll be playing, part of our homebrewed post-End Times continuity, is the re-conquest of Altdorf. Tom and I will be taking the Empire role trying to retake the Imperial capital while Iain and Matt will be holding the walls as a Warriors of Chaos/Beastmen alliance. 3,000 points per player.

Now, I don't have an Empire army so the plan was for Matt to lend me his, which is still the plan but I wanted to contribute something.

I have a couple of Empire kits knocking around because of a Mordheim campaign that never happened: ten Archers, a Warrior Priest and Markus Wolfheart (I was going to play Stirwood Outlaws). I also have five Pistoliers bought for a conversion that didn't work out. I've also built several Battle Wizards over the last couple of months for Tom to use in his army (long story, we'll get to it another day) which gives me the option, so far, of Heavens, Death, Metal, Fire, Light and Shadow Magic. The Shadow Wizard will be a Wizard Lord and my general, at least for the mega-game.

I also picked up a box of Handgunners because... well, because I love Sharpe, basically. Whatever I choose to do with this force they'll be the main characters and they'll be their regiment's Chosen Men. The sergeant will have a repeater handgun (for which I will have to come up with an Empire version of Mister Nock of London).

At the same time, I ordered the Captain with a hammer and pistol (who will swear a lot) and a Helstorm Rocket Battery. They may not actually be that effective but... well, Sharpe's Enemy is one of my favourite episodes and I rather want to quote the “dirty, deaf and damned” line when it inevitably misfires.

So far I've quite enjoyed putting the models together, they're very user-friendly. This project was only meant to be “a few models” to add some personal flavour to a couple of games but I might expand a little beyond this. I'll probably get some Demigryph Knights because I like Demigryph Knights by which I mean I hate Demigryph Knights and I heartily look forward to subjecting Tom and Matt to the pain they subject me to oh so regularly.
Posted by James Ashelford at 12:00

“This royal throne of Sigmar, this scepter'd land,
This earth of majesty, this seat of Ulric,
This other Eden, demi-paradise,
This fortress built by Nature for herself
Against infection and the hand of war,
This happy breed of men, this little world,
This precious stone set twixt mountains and sea,
Which serve it in the office of a wall
Or as a moat defensive to a house
Against the envy of less happier lands,
This blessed plot, this earth, this realm, this Empire.”