I love the Deathwatch but one thing I've learnt through bitter, bitter experience is that they absolutely need to do as much damage at range as possible. Once your enemy closes with you and starts causing casualties its basically over for that unit. The battlefield efficiency of a Kill-Team drops drastically with the death of each and every marine.

There's been a lot of speculation the last few weeks on the Deathwatch Facebook group I'm a part of about how the new Codex might combat this. Top of the wish list for most were either better special issue ammunition or some sort of invulnerable save.

As it turns out there is at least one new special issue ammunition type available in the stratgems but the big idea the design team has had is Mission Tactics. 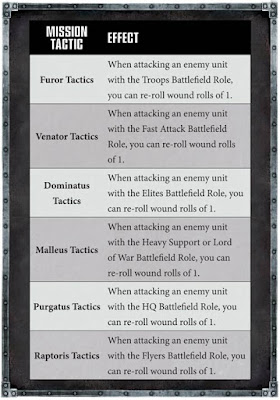 The basic idea here is to choose a type of unit (Troops, Fast Attack and so on) and for the duration of the game most everything in the army (infantry, bikes and Dreadnoughts) re-rolls 1s to wound against the type. There is a Warlord Trait and an item that allow you to change the Mission Tactic mid-game.

Obviously, I'll have to see how it works in game but this is probably the best solution to the problem. Deathwatch excel in shooting and have a slight weakness in combat because of their small numbers (more in the taking casualties area than the number of attacks area, obviously). This boosts the shooting and helps out with the combat problem, making them better at the thing they're meant to be amazing at and papers over one of the few real the army has.

I am very much looking forward to road testing this codex.

Posted by James Ashelford at 05:00