You know how it goes, there are some films that have been part of your life so long and that you've watched so many times that the pictures on the screen cease to have meaning. You forget what an astounding moment seeing the first dinosaur in Jurassic Park was; how dark Back To The Future Part II is; and you forget how unbelievably, wonderfully bleak the end of The Empire Strikes Back is.

It really is, and it shows how times have changed that I can't think of a film cliffhanger in the last twenty years to match it for completely screwing over the heroes. The second Pirates Of The Caribbean comes close but Lucas and Spielberg completely destroy every aspect of the formula they've spent two films creating: 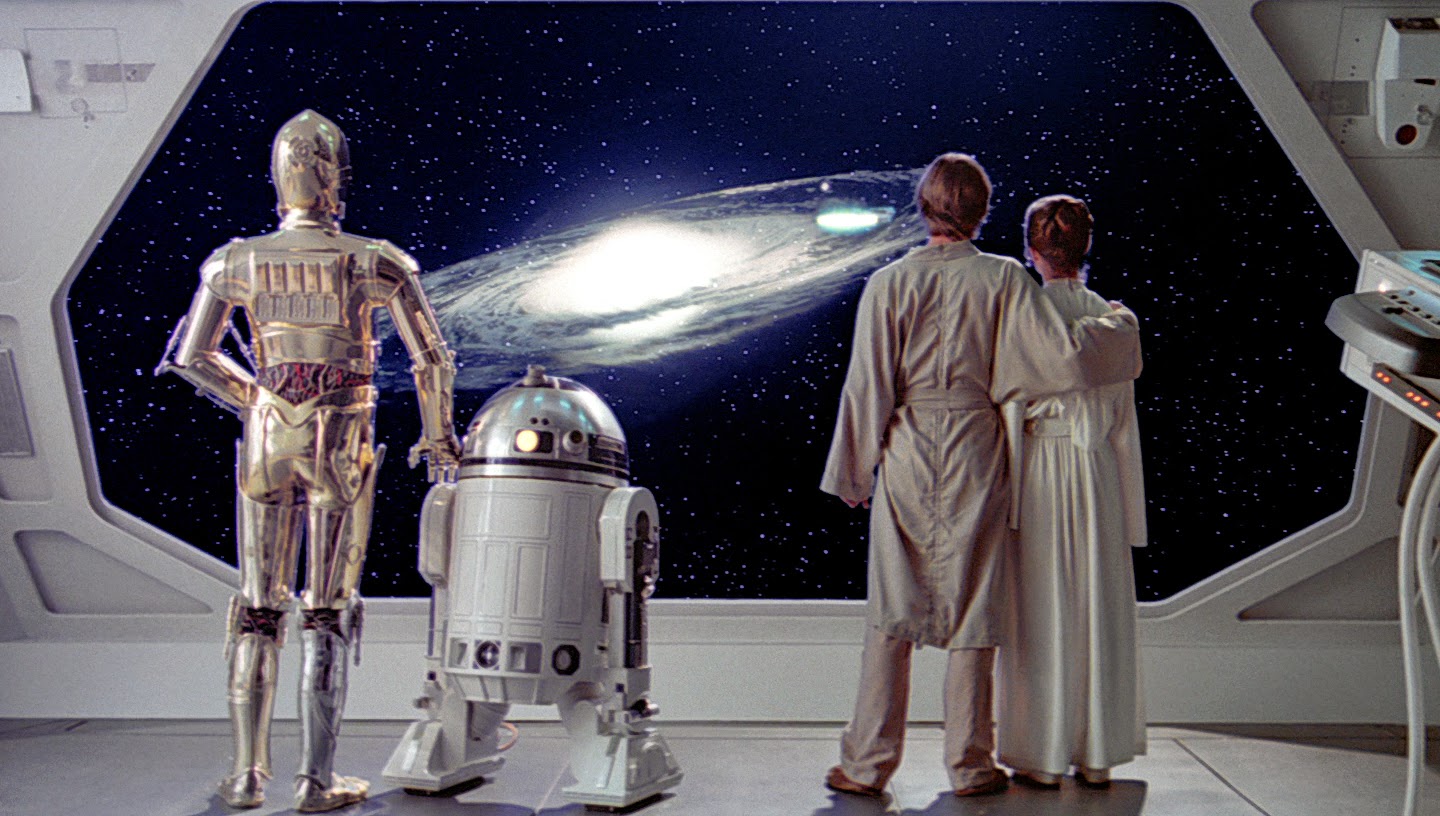 When Luke, Leia and the droids line up for the final shot they've lost virtually everything. As a group they've lost Han, they've lost another home base and they lose the Millennium Falcon when Lando and Chewie take it to search for Han which is a huge symbolic loss as well as a purely military one.

Luke has lost his hand; he's lost the fight the whole film was building to; he's lost his father for the second time; his memories of Ben Kenobi have been tainted; he's lost the comfort of believing his late father was a war hero; he's lost any hope that Leia might love him (this is still, at the time, a Bad Thing); he's lost his lightsaber; and in abandoning his training he may well have lost any right he had to call himself a Jedi.

Leia stands there having lost the love of her life (for this is Hollywood and there is only twue wuv); she's lost God knows how many people under her command at Hoth; and, worst of all, she's lost her focus. Compare the Leia of A New Hope with the one at the start of Return Of The Jedi. In A New Hope our first glimpse of her is of a gun-toting woman sneaking around a battle, risking her life to get a message out; she withstands interrogation and implied torture; she even hands over false intelligence when Tarkin is holding her homeworld hostage. Everything is for the good of the Rebellion and yet when Episode VI opens we see her taking insane risks for one man.

It's tempting to make a barbed, feminist point here but I like it, it works. The Rebels are standing up for what they believe in and what Luke, Leia and Han believe in are each other. They have to be reunited or they'll never beat the Empire. It's telling that lacking Han their infiltration of Jabba's Palace goes completely wrong. Yes, they have back-up plans but I find it hard to believe the Rancor or the Sarrlac figured in any strategy sessions.

Then comes the escape from the Sandskimmer and everyone gets a party piece to show that, reunited, they're back to being themselves. Luke gets to Errol Flynn his way through a horde of minions; Leia commits a very satisfying murder and gets to blow the whole place to kingdom come; and Han gets all the best lines and bumbles his way to saving Lando's life. Luke is a Jedi again, Leia is a commanding presence (wardrobe not withstanding) and Han is the charming rogue once more.


It's a restoration of cosmic order that injects the fun back into the series. The narrative collapsed in Empire and is restored in Jedi. It's brilliant on both sides of the coin and I don't think modern audiences would have this kind of patience. That cliffhanger stood for three years. Three years! Can you image a modern audience being asked to wait that long for resolution? We're too fond of instant gratification these days.
Posted by James Ashelford at 10:55

Man, it has been a long time! Three years between the end of the second movie and the third?

And, we didn't have the internet to talk about it either!