Yesterday I pre-ordered Doctor Who: The Fifth Doctor Box Set from Big Finish because I am honestly interested in seeing what they do with Adric. I took a moment to think about it and realised my expectations were actually really, really high. 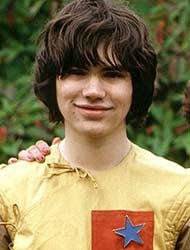 On the face of it this is insane. Take most any Doctor Who fan's temperature on Adric and you'll get a description along these lines: a mediocre actor playing a terrible character with material that is unflattering at best and utter dreck at worst (I mean, the “I love fascism” material in Four To Doomsday, Jesus fucking Christ). The character was killed off, the first “proper” companion to do so, and his death was followed by silent credits so fans could really, really hear those champagne corks popping.

This isn't to say the character is completely unloved, every companion is someone's favourite, but I can't imagine many people were clamouring for his return.

So why am I looking forward to this box set? It sounds like a trainwreck on paper. Well, two reasons. Firstly I'm only paying £20 for it and at £2.50 an episode I can't feel too swindled if it turns out badly. Secondly, Big Finish have worked miracles with... well, not worse characters precisely, but similarly poorly received ones.

They made me like Mel, after all, who on television no defining character traits and a professional background that was used a grand total of once (and for a line that made no sense). The same company managed to redeem Colin Baker's Doctor, not just by giving him material that allowed him to act but rehabilitating his relationship with Peri. They even gave Steven Taylor a personality beyond “action man” and “delivering William Hartnell's lines when he's ill”.

I can at least be assured that Matthew Waterhouse's acting has improved. Big Finish have done two Dark Shadows audios with him already so they aren't using him sight-unseen. So all that's left is to wait until August and see what they've done with Adric's personality...


That's the sticking point, isn't it? There isn't much to work with: he's good at maths, which is a bit abstract; he's awkward with girls; he's a bit easily influenced. Not much to work with but I look forward to seeing what they manage to get out of it.
Posted by James Ashelford at 06:00