Due to some unfortunate life-related business followed by crushing art block on how to paint the crossbows and axe hafts, I didn't get the Rangers finished, as you can see. 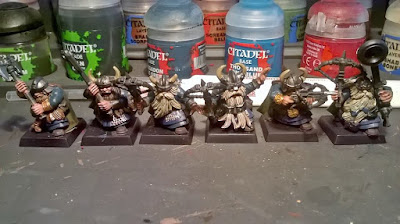 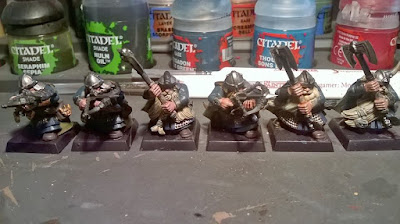 However, in random spare moments I have been able to make some progress on clearing the painting table. 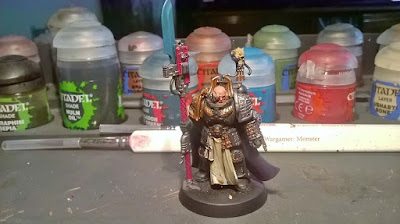 A model I really want to be a production number, the Deathwatch Watch-Master nears completion with only some final metallic details and the Inquisitorial seals on his cape left to do. I rather like how to the drybrushing on the Guardian spear blade came out, which is good since I ruined a perfectly good drybrush that I can now only use for Sotek Green. 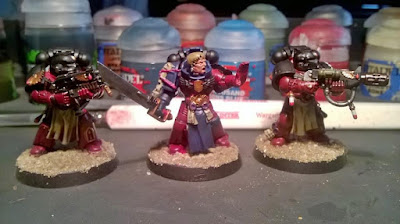 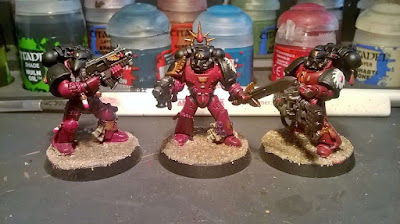 Sanded and moving to the basing shelf are five Flesh Tearers Tactical Marines including Sergeant, meltagun and heavy flamer, plus a kitbashed Librarian. The white on the chapter heraldry is still not as flat as I'd like but I feel I'm making progress.


I also can't help but feel that no matter what I do with inks, that blue on the Librarian is too flat. Still, I like how the conversion came out with the warding hand. 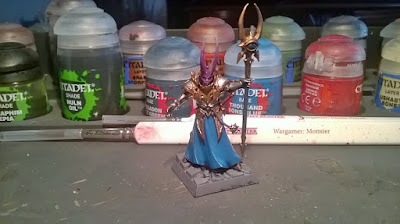 Finally, a test model for my Tzeentch Chaos Warriors. A lot of work to do on this one but I like how the Thousand Sons Blue looks on the cloth. I think the silver armour is going to have some sort of glaze over it to give it a “magical” sheen, probably blue but I'll decide once I have the gold layered up to Auric. Also, I need to look up a good stone method for that base from the How To Paint Dwarfs book.

This might seem a little weak sauce and, honestly, it is. For one thing I do want to finish those Rangers and don't want to add anything large to the painting table but I do want to fiddle around with the models I just bought. That said, building them will be a little less than straightforward as they're for an old school Fantasy army so I have to get models designed for round 32mm bases to rank up on square 25mm bases.

Hopefully not too much of an ask as the scales don't seem too different but it might take me some time and fiddling about.
Posted by James Ashelford at 10:00