A Tzeentchian Knight (in theory)


I actually came up with this idea for someone else's benefit. I was in Games Workshop the other day and one of the staffers and I started talking about conversion ideas. He was looking for a project and was thinking of doing something with the Imperial Knight Crusader. My suggestion? Tzeentchian Renegade Knight by hybridising the Knight with a Heldrake. The thing is, as expensive as it is (I was suggesting this idea to someone with staff discount), I think it would look amazing and I'm quite tempted to try it.

So here's how I think it would work: 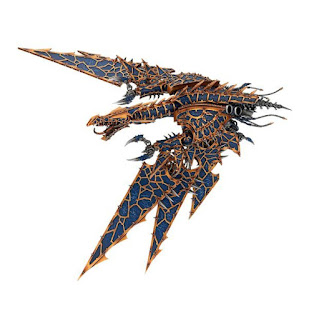 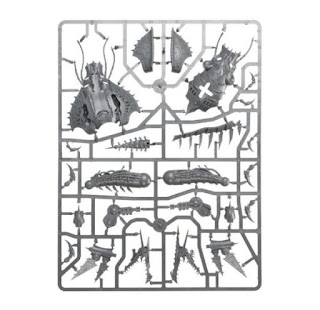 … which should change the profile of the model considerably. I'll dryfit that just to be sure it won't look too ridiculous. Also on that sprue, centre top, are two shoulder pad things that, with a little cutting and filling, might well fit on top of the Knight's shoulder pads for extra Chaos iconography.

Also of use from the Heldrake are its wings, which I think can be spaced along the rear of the Knight's upper carapace and down its back, and its talons which I intend to add to the Knight's toes to make them more Avian. I'm also going to see if I have any plastic Marks of Tzeentch from the Chaos Vehicle Accessory Sprue knocking around. I should, I've only ever used the Nurgle and Chaos Undivided stuff from those sprues in the past. For sure I have the large Rubric of Ahriman that comes with the Thousand Sons Rubric Marines, which should fit well on the shoulder-mounted heraldry shield.

Now, even using a discount store like Darksphere (who are great, by the way) this'll set me back about a hundred pounds but it will look so good once finished that I am genuinely tempted. So, I'm going to take a couple of days to think about it, maybe work on those Rubric Marines to get the colour scheme right in my head and come back to it.

It would look awesome, though.