I have come to hate the Cadian Shock Trooper. Its not that they're bad models, they're perfectly competent sculpts, pretty user friendly to build and paint. However, they are also immensely boring and I have painted dozens over the years and they are basically designed to be boring. They are literally the “standard issue grunt” recruited in their billions by the Imperial Guard.

So, when I decided to finally revive my old Guard army, the Silvik 23rd / Metellus 5th Tactical Support Detachment, I knew I had to do something to make them a little more interesting to look at and paint. 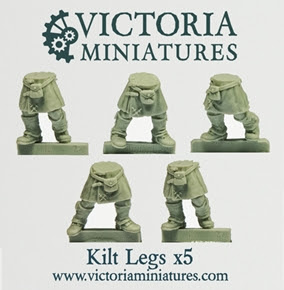 Enter Victoria Miniatures and their Kilted Legs set. They, in fact, do entire figures “Highland Guard” figures who just happen to dead ringers for the Drookian Fen Guard but I did want to keep some of the outline of your classic Cadian Guardsman. Also, the complete figures come out a little expensive and I want a largely infantry-based force. My background for the army always had them (at least, the Silvik side of the regiment) come from a very mountainous world so tanks and such are at something of a minimum. Lots of Sentinels, though, I like Sentinels.

First, though, I'll be painting this Veteran Squad. They are Sergeant Pertwee and his Particulars, the regimental quartermaster's personal scrounging squad whose... extracurricular activities get a blind eye turned to them by Commissar Foster and Stratego Callum so long as the Sergeant is willing to lend the squad's considerable skills to certain behind enemy lines missions. This would be the reason they're armed the way they are: a nice all-round squad geared up to break bunkers and vehicle armour but capable of going anti-infantry if I have a need.

I'm almost certainly giving them a Chimera. It might not have originally been theirs but you can repaint those things pretty quickly if you feel the need and I don't know what you mean, Commissar, there's always been this many Chimeras in the pool, purely a discrepancy in the paperwork we'll get it corrected, just sign here, sir.

Now I just need to decide how to paint them. I don't want to go historical redshirt on them but I have also painted enough green and grey over the last couple of weeks to last me a while.

Maybe something in blue?
Posted by James Ashelford at 10:00