I was trawling ebay the other night and found two models from Reaper Miniatures that really inspired me. I've been thinking for a while of dusting off my Bretonnians and adding some units based on Matthias Elliasson's superb Warhammer Armies Project: Bretonnia book (available free from his site, incidentally).

One of these units is Herrimaults. They're bowmen with Skirmishers, Scouts and BS4 led by a Character called a Faceless, who has the stats of a knight. So, pretty obvious where all that's going: Robin Hood and His Merry Men.

Now, back in the day when Bretonnians were fresh and new additions to sixth edition, I did used to take a unit of skirmishing bowmen as a bodyguard for my Damsel and I rather think I'll return to the tactic. However, if they're going to be outlaws they aren't going to be hanging around with the noble daughters of the castle. Rather, I think I need to have some models to represent Damsels who have chosen, like the Faceless, to forsake their birthright in order to stand for the common man. 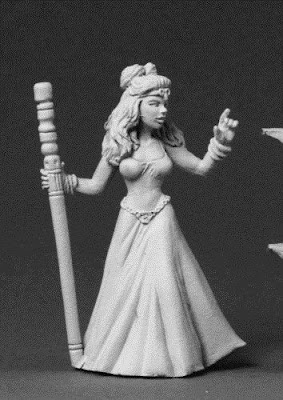 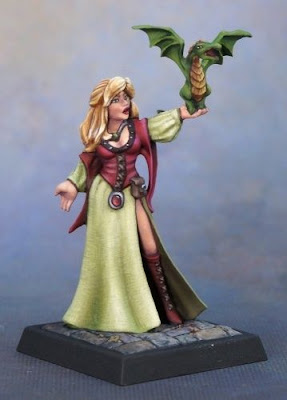 Enter the Reaper Miniatures models Tinley and Tristan the Loeremistress (pictures from the ebay listings). Tristan, she with the dragonette in her hand, could certainly look more like a barmaid than a noblewoman with the right paint job. Tinley, meanwhile, has that Little John-style pole in place of the more decorative staff a battle wizard is usually seen toting.

As to the Herrimaults themselves, I recall having some Wildwood Rangers' heads knocking around from when I made my Eternal Guard so I'll see if those can fit on a Peasant Archer's body which would make the Herrimaults look distinct enough from the rank and file Bowmen. Well, that and the monochromatic green colour scheme they'll inevitably have, of course.
Posted by James Ashelford at 10:00