So, my housemate and I have spent a bunch of time tidying up and spring cleaning the last week so hobby time has been limited. As a consequence I haven't got anything from that big basing shelf picture last week 100% finished. A few are close, most need a lot of basing work, but I wanted to spend what spare time I had plugging away at new things so I could keep feeling that momentum rather than the basing stuff because that always feels like such a slog.

Is that just me? It just feels like every layer takes so damn long to dry. Anyway, so here's what we got for this week:

I had my second Necromunda game, this time against Dave J's Eschers in a Sabotage scenario that I won and (mostly) escaped intact from. Hilariously, my Goliath's retreat from the burning chem-still was covered by the underhive's most resilient juve. Armed only with a stubgun and spud-jacker and no statistical or armour upgrades whatsoever it took two Escher gangers and two champions to take him down. It was the sort of epic moment the small scale skirmish format is absolutely amazing for.

The nearest I've come to finishing anything this week are some Death Guard bits a few minor details away from done. 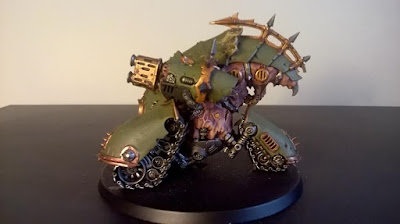 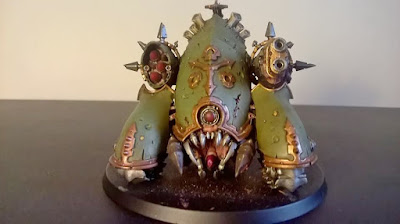 The Blight-Hauler just needs one more pass before I apply the sand. It was a pleasure to paint and I definitely want to get a complete unit of three together in the near future. It also gave me a chance to experiment with dark metallic methods to a varying degree of success. The brass trim is just Balthasar Gold inked with Reikland Fleshshade a couple of times which worked brilliantly whilst the head of the multi-melta and vent grilles were... less successfully drybrushed Runelord Brass. I'll try layering it on the next model. 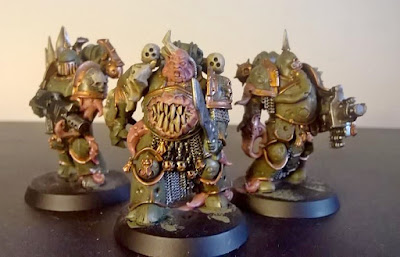 Actually, I think I'll try layering the Runelord Brass on the face grill of that Plague Marine on the left. Its mainly been a matter of filling in small details and getting the inking done on the golds this week. To be honest, the reason for rushing these through has been to remind myself how I was painting the things so I can go back and finish all my half-done Dark Imperium models. 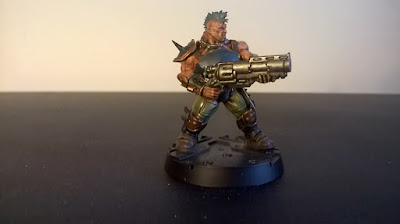 I've done all the large, basic colours on the gang as a batch and now its time to take a single miniature and work on the detail methods. I've not got far, just basing and inking the areas that are going to be brass and filing in the mohawk. I don't think I'll go for the Thunderhawk Blue hair on the whole gang. In fact, I might give everyone different hair colours, it'll be a good way to keep the different ganger straight in my head when writing down XP and so on. 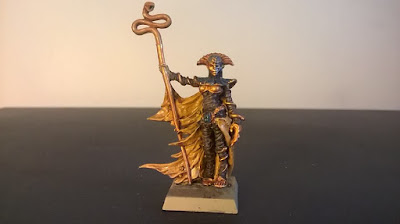 Though 40k has been grabbing most of my attention I've been getting in the mood for some square-based stuff and so I dug out Queen Khalida here (who will be a Heirophant using the Lore Of Light in my army). I wanted to try out the yellow method I used on the Deathwatch Marines Malevolent Kill-Marine on cloth so she'd have a rather dirty and degraded once-glorious cape of sunlight gold. It came out rather well.


I am less pleased about the snake at the head of the staff. The orange looked better before I painted in the gold staff, now it just looks too similar. I'll probably repaint if red once I have the golds inked and layered up.

A Bug, Not a Feature 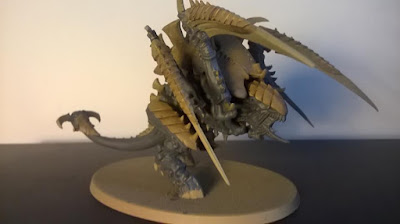 Newly arrived from eBay, the one indispensable element of a Tyranid army (I think): a traditional Screamer-Killer style Carnifex. I've always loved the design and this one was cheap so here it is. Sadly, I'm going to have to redo the back carapace as the ink dried a little funny. This was another big bug I undercoated in Zandri Dust which means the grey skin is taking me forever to basecoat, the alternative of course... 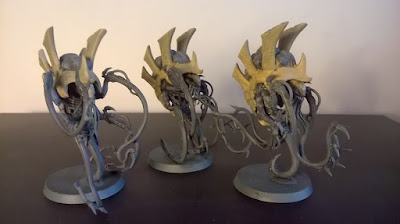 … to undercoat them grey and then spend ages layering the Zandri Dust onto the carapace. At this stage I am genuinely resigned to the fact that neither undercoat cuts down the painting time and the choice is purely down to which colour is the majority or the most accessible on model on a case by case basis. 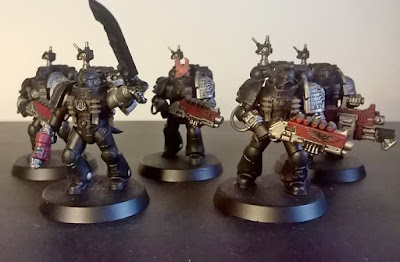 And, finally, a little more work has been done on Kill-Team Pellos. Not much, just some more work on the metallics and drybrushing on the leathers. Still, progress is progress as I've been saying all month.
Posted by James Ashelford at 05:00