It makes an awful lot of sense, knowing me, that the moment I decide to take things easy hobby-wise I end up doing more painting in a single week than I managed in the whole first month of the year. If nothing else it proves that shorter, more frequent hobby sessions are doing me more favours than trying to block out an entire evening for this stuff.

Nothing's finished (and I still haven't done the basing on the Hive Tyrant and Tyranid Warriors) but I have got a surprising amount of stuff done: 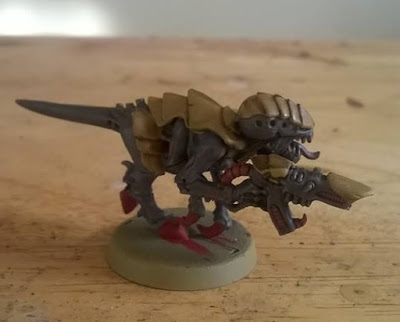 A friend once told me that the two most important attitudes an artist can cultivate are “good enough” and “screw it” and I'm starting to get it with the Hormagaunts. They were an experiment in undercoating with Zandri Dust spray and the finish came out all wrong. The grey flesh took layer after layer, the ink and drybrush didn't take quite as well on the carapace as I'd like... and I'm done trying to fix them. They're Hormagaunts, they're small, there'll be two dozen others and no one is going to look at them as individuals so I'm just going to do a final pass on detail work and call them done. You can see in the singular example how the inking has splodged here and there, especially on the gun. I'll fix what I can but I'm calling time on them and letting them be what they'll be. 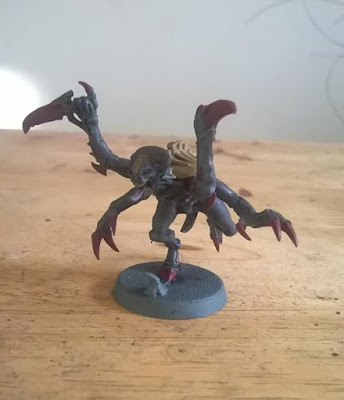 The Genestealers, who were undercoated grey, came out a lot better even if it did take a layer or two to get the Zandri Dust to take on the carapace. Between them and the still-incomplete Hive Tyrant and Warriors I feel I've definitely nailed down the colour scheme for Hive Fleet Jormungandr even if my interpretation of the artwork violently disagrees with 'Eavy Metal. 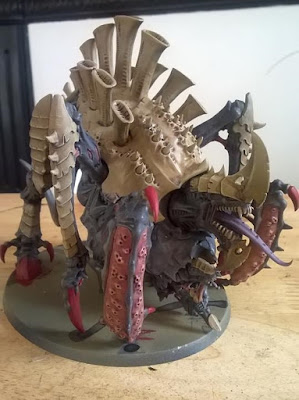 Yes, I know there are some parts missing from the middle legs. I bought this one off eBay and I think that's why I got it for such a discount. As you can see from the base, this one was also undercoated Zandri Dust like the Hormagaunts and somehow the carapace has come out a lot better. I'm genuinely unsure why, especially as I didn't have the trouble with the grey flesh I had on the Hormagaunts, either.

A little more experimentation is due so for the moment I'll try undercoating the small stuff grey and the large stuff Zandri Dust and see how it goes.

Plus, literally all this model needs is some tidying of the grey around the gill things on the legs and I can start basing it. 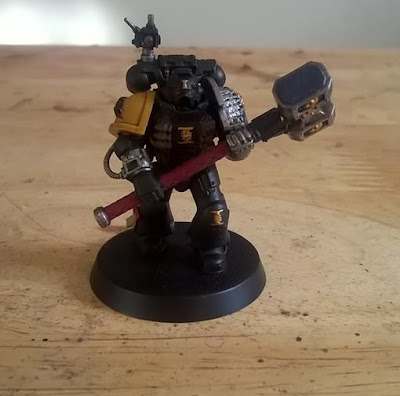 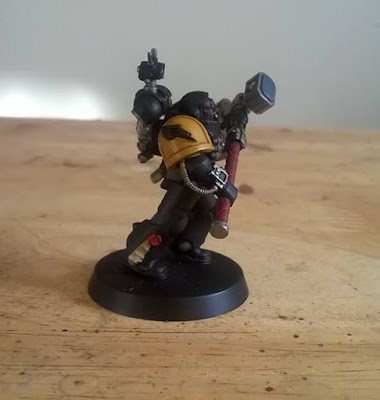 A single test model, this one, as I tried out the methods I'll be applying to the rest of the army and road tested the first of the 3D printed shoulder pads from POP Goes The MONKEY (that is actually how he spells it). This one used a Marines Malevolent shoulder pad which fit perfectly over the shoulder connector, took the undercoat relatively well (it needed a little touching up) and the detail is crisp and easy to follow with a brush. It looks practically indistinguishable, as you can see, from something GW would produce.

I also think I've finally cracked yellow, a colour second only in infamy to me to white itself. 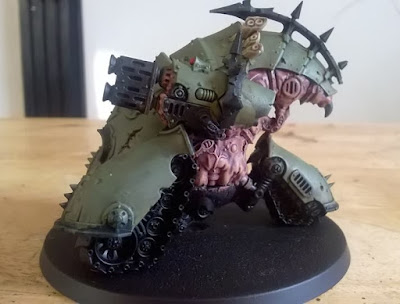 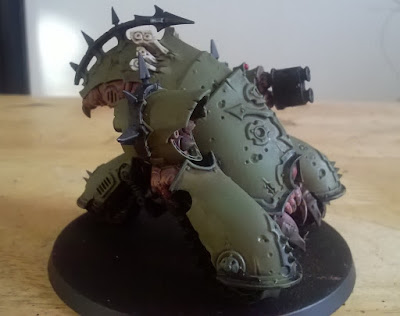 This is a pretty typical example of what I'm getting done in spare moments on busy days: getting the larger areas of models blocked out. So the Blight-Hauler now has all its green and flesh areas finished and when I have more time I'll go back and do the more detailed work like the silver metallics and brass trim and so on.

Also, its nice to be working on this model because it is so damn adorable. 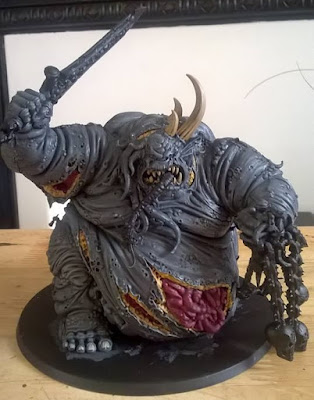 Significantly less adorable but no less fun to paint is the Great Unclean One, again mainly just having finished the larger areas that I could achieve mainly through drybrushing. Actually, what I really like about the Nurgle Daemons and the Tyranids is how well they take to my drybrush-heavy techniques.

I'm not convinced the Screamer Pink guts work as well against the grey flesh tone as they do on the green-tinged flesh Warhammer TV used in their painting tutorial but I'll wait until I have them inked at least before I decide whether to repaint them or not. 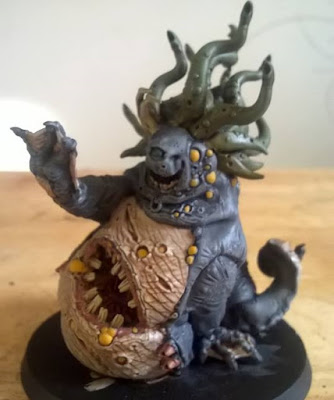 Finally, and back to the cute side of Nurgle, this has been my favourite model to paint from the whole batch. It was a bit of a nightmare to put together because the connectors are so non-standardised and the manual is no bloody help but the finished product is so very worth it. It was also a good test model for some new methods I wanted to try out to diversify the look of the Nurgle Daemons like the Rakarth Flesh / Reikland Fleshshade / Pallid Wych Flesh method on the underbelly.

Other, less visually interesting, progress
I've built a Goliath gang for a friend's Necromunda campaign and I'll be having my first game this weekend; my Imperial Knight arrived from eBay as well as an alternate head piece for it from Shapeways so I'm going to start working on that conversion in the coming week; and, I undercoated my Adeptus Custodes Captain-General Trajann Valoris and a Furioso Dreadnought.

So, all in all, a successful first week.
Posted by James Ashelford at 17:00