The Paradox of Kendra the Vampire Slayer 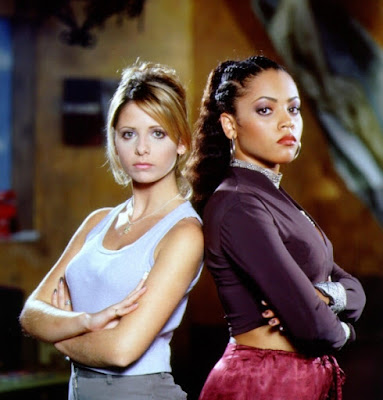 On the one hand, I really think she was a wasted character. She appears in a pair of two-parters, the first of which she's a decoy villain for half of it and the other where she spends half of it dead. She offered Buffy an interesting foil because the one thing Buffy could rely on before this point was being unique, there was this one thing she was by definition the best in the world at. Then along comes Kendra, who has a Slayer Handbook that was withheld from Buffy, who fights Buffy to a standstill despite having a couple years less experience, who bonds with Giles on a level Buffy won't for years and never previously considered.

They come to the beginnings of an understanding by the end of What's My Line, to the point that when she turns up again in Becoming its something to smile about.

So yes, we don't get much of her and I wish there was more. That scene where she practically blushes in the face of Xander's barely competent flirting makes me yearn for scenes of her and Willow bemoaning their romantic inexperience. I also think that Buffy and Kendra as “sisters” would have been a fantastic angle, as the few scenes of them getting on in Becoming hint at.

On the other hand, though, it is a perfect bait and switch. Kendra appears in What's My Line to highlight how serious curing Druscilla would be. After everything Spike has done, after everything he's survived, its Dru who amounts to such a threat that two Slayers are required to fight her.

And then Kendra returns in Becoming. Another two-parter and the season finale and it looks like we have a handle on how this character works: she turns up for the big events, a semi-regular presence whose presence is code for “Take this one seriously!”.

Then she dies. Dru waltzes majestically into the library (itself only violated in momentous event stories), hypnotises her without effort and slashes her throat. Its another moment alongside the “death” of Angel, Xander's betrayal and Buffy abandoning Sunnydale at the end of the story that makes it look like the series might actually be killing off the Sunnydale setting and moving on. It doesn't, of course, but it raises the stakes effectively and actually delivers on the amazing threat that Dru apparently represents.

So, I would definitely have liked to see more of Kendra but, honestly, I wouldn't want to undo her death because it works so very, very well.

Posted by James Ashelford at 10:33