A light week, to be honest.

For a start, there was a small furniture collapse in my room that smashed and mangled beyond repair two Termagants, my Genestealer Patriarch and the very nearly almost certainly finished Easy Build Plague Marines. It also did a small amount of no good to my Blight-Hauler which is not missing a couple of spikes.

No actual finished models. To be honest, this little incident rather knocked the wind out of my sails for a day or two.

Had a quick 50 power of 40k: my Tyranids against Matt's Death Guard. I got tabled but not before taking out all but four or five of his models. I am still running a mainly combat-oriented list because that's what was mostly painted and I think that what I really need is more range on the army to soften up the opponent before reaching combat, especially super-elite armies like the Death Guard.

Anyway, on to the painting table: 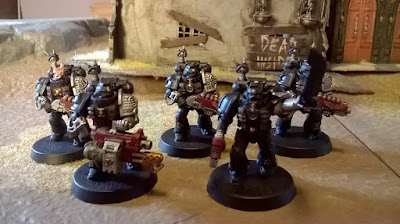 A little highlighting and the golds on the Kill-Team are done. After that a little tidy up and I can get started on the chapter shoulder pads, which is the fun bit. Or maybe not because the sergeant is a Star Phantom and that means painting a flat white and then filling in the small chapter symbol in black. 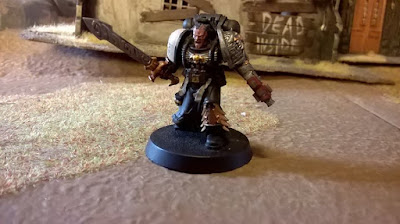 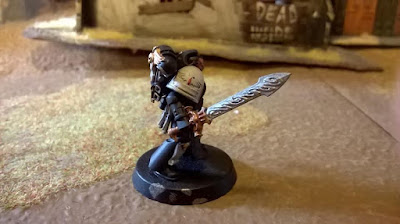 Anyway, I also made some progress with the Librarian from Kill-Team Cassius. He needs more work than the Kill-Team including a little extra work on the golds which did not come out as consistently as I'd like, especially the big winged blood drop on the leg. I am happy with the shoulder pad, though, which has a very (for me) consistent bone colour. Its about three or four thin coats of Rakarth Flesh and I feel that I'm making progress in the multiple thin coats department. 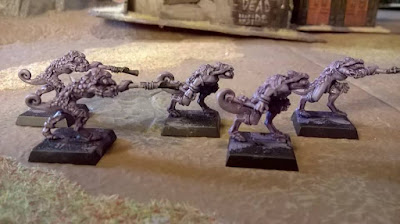 This did not come out how I imagined it. I painted the shields of my Skink Cohort in the Slaanesh-themed purple greys and thought it might make a good skin tone for the Chameleons. I was wrong and I think I might redo these in a green or something. Either that or try improving the look with something darker on the back scales. 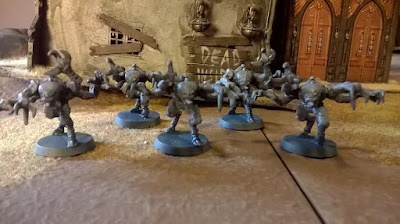 The other week Tom sold me some old Tyranids of his. The box contained mainly second and third edition models, which I don't mind because I quite like those old designs. The super-thin and delicate looking, metal Zoanthrope I adore and am using as a Neurothrope. Anyway, the box contained about twenty old-style Genestealers.

They do, of course, look very different from the modern Genestealers so putting them next to each other looks odd. So I'm painting these in my Jormungandr colour scheme but I'm planning to use them as Purestrains in my Genestealer Cults army. I just have to work out whether those big growths on their backs are meant to be carapace or skin of some sort before I go further in painting them. 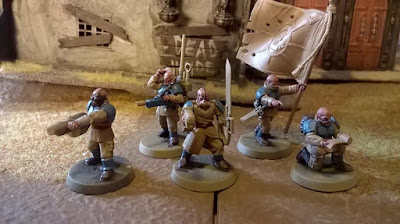 And, finally, the first Officer and Command Squad for my Savlar Chem-Dogs. Now, for those just coming in, this is my “2-for-1” army: an army that can be Traitor Guard units for my Genestealer Cults and an Imperial Guard army in its own right. The other week I finished a test model that was just an ordinary lasman and now I wanted to try out the conversion and colour scheme on a unit that I can't use for the Cults just to make sure it works for the Guard. 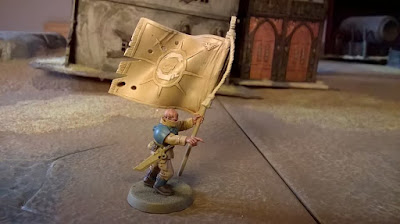 I think it does. I have to work out a colour for the cuffs on the officer and standard bearer, how I want to paint the details on the banner and so on. I'm using a rather heavier Karak Stone drybrush to really build up the colour. Looking at how the fatigue colour came out on the standard I'm really looking forward to trying out the scheme on a vehicle.
Posted by James Ashelford at 17:00