With Warhammer Fantasy no longer being a going proposition I'm always on the lookout for interesting alternative models. The other day I was trawling eBay on my regular trawl for out of production High Elves characters (there are so many great ones...) and after a little link-following stumbled across these: 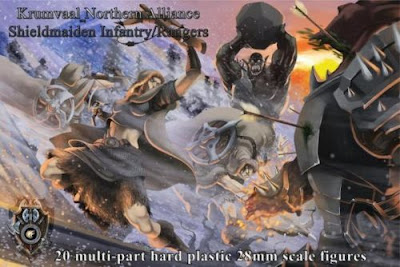 Shieldwolf Miniatures' Shield Maiden Infantry. Twenty models with options for hand weapons, shields, spears and crossbows. For my purposes the crossbows aren't important but I mention them for completeness. 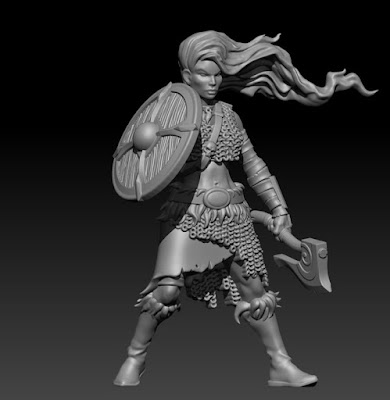 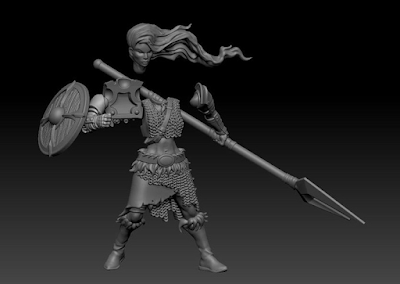 Now, it may seem unfair to look at these models and see them only as alternatives for another company's models but, to be frank, there's no chance that I'd ever get to play Shieldwolf's own game system so this is the only way they'd get my money.

(Well, that an eBay seller would get my money and they got his money but you know what I mean. Money was got and ultimately it was got because I play Warhammer.)

So, female Chaos Marauders. There's a Kickstarter coming soon for more heavily armoured female miniatures who could easily be their Chaos Warriors. So, if you ever wanted to do Valkia's Horde of Chaos Ladies or just wanted to represent the fact the Norscans are a warrior culture and that maybe their womenfolk might be involved here's a good option.

You could also use them as Kislevite Kossars which would be a good use for the crossbows. I know Kossars are armed with ordinary bows rather than crossbows but they have access to Empire technology so it wouldn't be entirely out of line or you could simply count the crossbows as ordinary bows. Kislevites are quick on their feet it makes sense that they'd have worked out how to walk and aim at the same time.

For my part, though, they'll be Marauders because, as usual, my conception of Chaos is very, very influenced by the less technologically advanced peoples of Game of Thrones so basically a cross between Dothraki, the Free Folk and the Hill Tribes.

Any character I create for them will be less annoying than Ygritte.
Posted by James Ashelford at 10:00