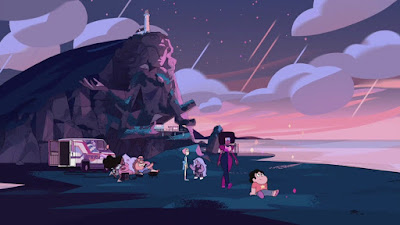 Yesterday I finally sat down and watched a couple of episodes of Steven Universe and as I watched I could just feel the rabbit hole opening up beneath me. What I watched, for the sake of spoiler warning and in case I make any false assumptions based on my limited experience, were Last One Out of Beach City, Back to the Moon and Bubbled, plus a couple of Youtube clip compilations about Peridot, Stevonnie and Garnet

I absolutely adore Pearl. She may be an immortal, holographic gem person from outer space but she's also an anxious homebody who turns into an absolute wreck when faced by a pretty girl. I can't claim I haven't been in that situation a time or seven.

And just... it could not be clearer what is going on. Pearl runs into a hot girl on the way to a rock show, a girl who bears some startling resemblances to her ex, and proceeds to fall over herself trying to ask the woman how she dies her hair.

How anyone with the slightest sense can try to claim “no homo” on this series baffles me (and yet, the comment sections...).

The little platoon of Rubies in Back to the Moon are adorable, aren't they? I guess from the dialogue that they appear before that and hope they'll appear again because I really want to see more of this naïve yet gung ho quintet. That said, Lapis is even more fun than the Rubies are, just casually imprisoning the lot of them in water bubbles so they can be interrogated one at a time.

I like how domestic Greg Universe is in that scene where he darkly muses about Barb holding his mail as some terrible threat.

The animation style is very interesting, Very simple yet very expressive and there's always something to see even in a functional two-hander like Bubbled there's so much to see. I imagine half the fun of this series is seeing what Rebecca Sugar and company come up with next, both visually and story wise.

I really want to see some episodes focusses on Steven and Connie's relationship, I think that'll be the next thing I track down.

Yeah, I can definitely feel the rabbit hole opening up under me.