I am glad that the body I originally bought to make Gabriel Seth (the power armoured Legion Praetor) turned out not to fit the chainsword I was using because my second choice for the body has worked out so much better: 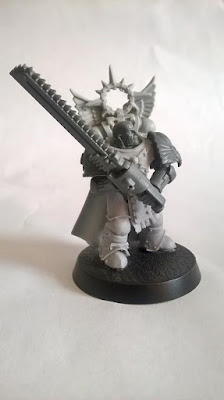 The twist in the body, on the original model meant to facilitate a pose where the Captain is drawing his sword from a scabbard, gives a real sense of motion that matches the way the chainsword is held and how the cape hangs. The title in the torso also meant I had to pose the head looking upwards, which works as I imagine I'll be charging Seth in towards the biggest, scariest thing on the battlefield.


It also retains the sense I wanted to convey of a more controlled and commanding Seth but with more dynamism than the Praetor body would have got me. I still don't know what I'm going to do with the Praetor but this has come out better than I imagined, the cape component even fit perfectly to the back without any remodelling to either component.

So, down to parts: 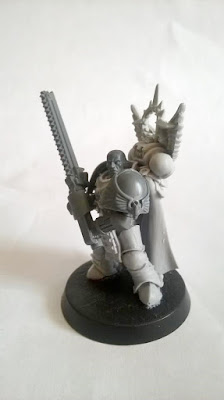 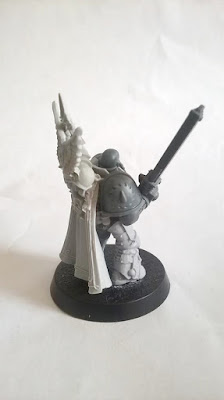 The main body (torso and legs are one component) come from the Forge World MkIII Command set via eBay; the Eviscerator chainsword and arms from the Space Marines Assault Squad, the head from the plastic Horus Heresy MkIV Maximus Armour set; the Flesh Tearers shoulder pad from the Deathwatch Kill Team kit (its why its on the “wrong” shoulder); the other shoulder pad a spare from the Sternguard Veterans kit; and, finally, the backpack and cape from the original Gabriel Seth model leftover from one of the several irretrievably damaged Seths that drove me to make this conversion in the first place.

I'm not usually one for special characters but Seth really inspires me as a character. I like that his attitude towards the inevitable tragedy of the Blood Angels geneseed is to pick up his sword and declare that by the time insanity and genetic degradation destroy his chapter there will be nothing left alive to challenge the Emperor's dominion.
Posted by James Ashelford at 10:00