Thundercracker is actually quite pretty 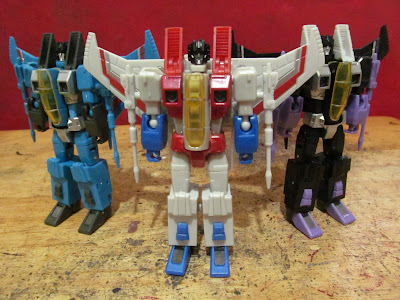 I don't know who originally said it, I know the first time I heard it was from Thew Adams on YouTube, but Thundercracker seems to be everyone's second favourite Seeker. For most people the best one is Starscream, which is more than fair since he not only has a personality but a really fun one as the archetypal traitorous lieutenant. Then there's Skywarp who has the cool black and purple colour scheme as well as a fun little superpower with his teleportation.

And Thundercracker is also there.

Not that there aren't good versions of Thundercracker. I absolutely adore the version from IDW with his pretentions of becoming a screenwriter and weird as all hell friendship with Marissa Fairbairn. The thing is, though, that he's mostly just sort of also there.

And I never had any of the G1 Seekers back in the day so it never really occurred to me that... 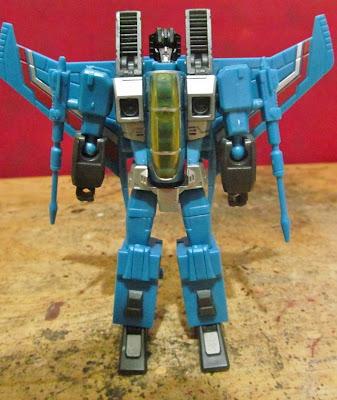 … Thundercracker has a really nice colour scheme. Sorry for the downright disgusting state of my painting table, it was the only surface available at the time. But, yeah, the blue and silver with the little splash of red on the wings is actually rather gorgeous now I have it in hand. Even in this very flawed knock-off version (its the Pocket Toys knock-off of the DX9 War In Pocket version) with shoulder thingies that don't match silver of the the cyber-titties, sprue marks all over the place and all sorts of flaws in what few paint apps there are he still looks great.

I bought the set for Starscream and Skywarp but in the end I found myself more impressed by Thundercracker here which was a very pleasant surprise. Its rare that I'll buy a figure just to complete the set and its nice that one of the few times I did it I ended up quite enjoying the figure on its own terms.